Tattoos of the princess of the Sochi paralympics 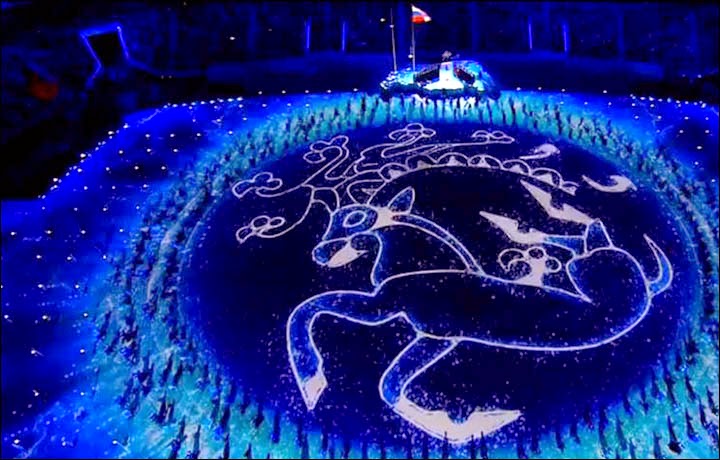 The image above, broadcast worldwide on television during the Sochi paralympics, is a representation of one of the tattoos found on a Siberian mummy.  Her story has been featured three times in Siberian Times.  The first article, in August of 2014, provided this background:


The remains of the immaculately dressed 'princess', aged around 25 and preserved for several millennia in the Siberian permafrost, a natural freezer, were discovered in 1993 by Novosibirsk scientist Natalia Polosmak during an archeological expedition.

Buried around her were six horses, saddled and bridled, her spiritual escorts to the next world, and a symbol of her evident status, perhaps more likely a revered folk tale narrator, a healer or a holy woman than an ice princess.

There, too, was a meal of sheep and horse meat and ornaments made from felt, wood, bronze and gold.  And a small container of cannabis, say some accounts, along with a stone plate on which were the burned seeds of coriander.

'Compared to all tattoos found by archeologists around the world, those on the mummies of the Pazyryk people are the most complicated, and the most beautiful,' said Dr Polosmak. More ancient tattoos have been found, like the Ice Man found in the Alps [Otzi] - but he only had lines, not the perfect and highly artistic images one can see on the bodies of the Pazyryks. 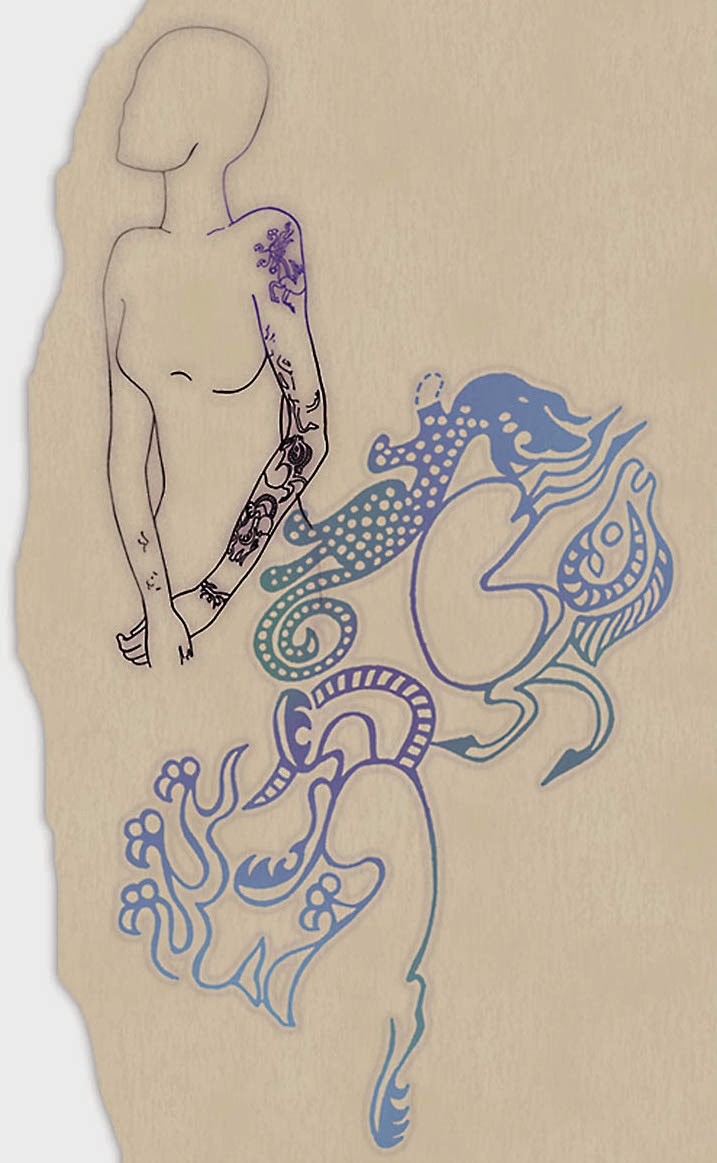 The mouth of a spotted panther with a long tail is seen at the legs of a sheep. She also has a deer's head on her wrist, with big antlers. There is a drawing on the animal's body on a thumb on her left hand.

On the man found close to the 'princess', the tattoos include the same fantastical creature, this time covering the right side of his body, across his right shoulder and stretching from his chest to his back...

We can say that most likely there was  - and is - one place on the body for everyone to start putting the tattoos on, and it was a left shoulder. I can assume so because all the mummies we found with just one tattoo had it on their left shoulders. 'And nowadays this is the same place where people try to put the tattoos on, thousands of years on.

The second report, later that month, offered more details re her garments and the burial chamber.


Now, thanks to pioneering work by academics in Novosibirsk, we also show how this ancient Pazyryk woman looked in real life and display not only her clothes but also the vivid colours she wore and her stylish headdress...

Archeologists even found items from her 'cosmetics bag', which lay inside her coffin next to her left hip, notably a face brush made from horse hair, and a fragment of an 'eyeliner pencil'. This was made from iron rings, inside which was vivianite, giving a deep blue-green colour on the skin.

There was also vivianite powder, derived from an iron phosphate mineral, apparently to be applied to the face...

'She was dressed in a long and wide woollen skirt, made from three horizontal strips of fabric. The skirt was 144 cm long, 90 cm wide on the top, and 112.5 cm at the base.

'Each strip of  the fabric was coloured separately: the top one was crimson, the middle very slightly pinkish-yellowish, and the third of a very rich Bordeaux colour. 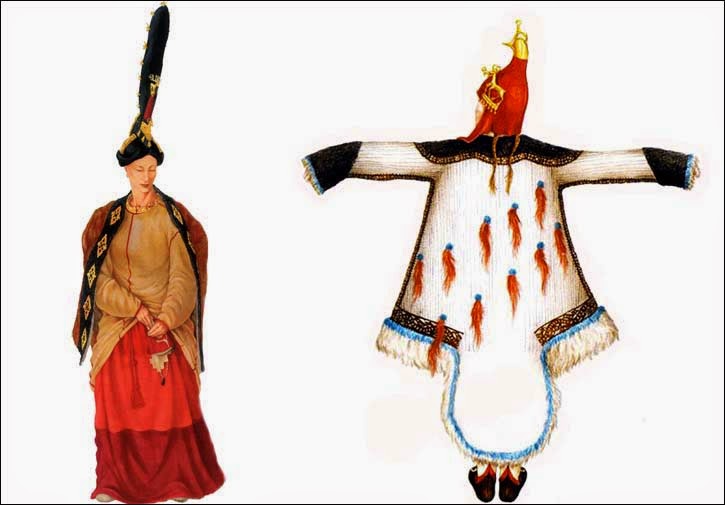 Many more details at the link; it's very interesting reading.  Of course, our attention is drawn to that remarkable hairdo.


The real eye-opener for Dr Polosmak was the high and  distinctive head wear. And the linked discovery that the 'princess' in fact had a shaved head, with no hair, but instead wore an elaborate wig, that remains intact to this day, enabling detailed study... 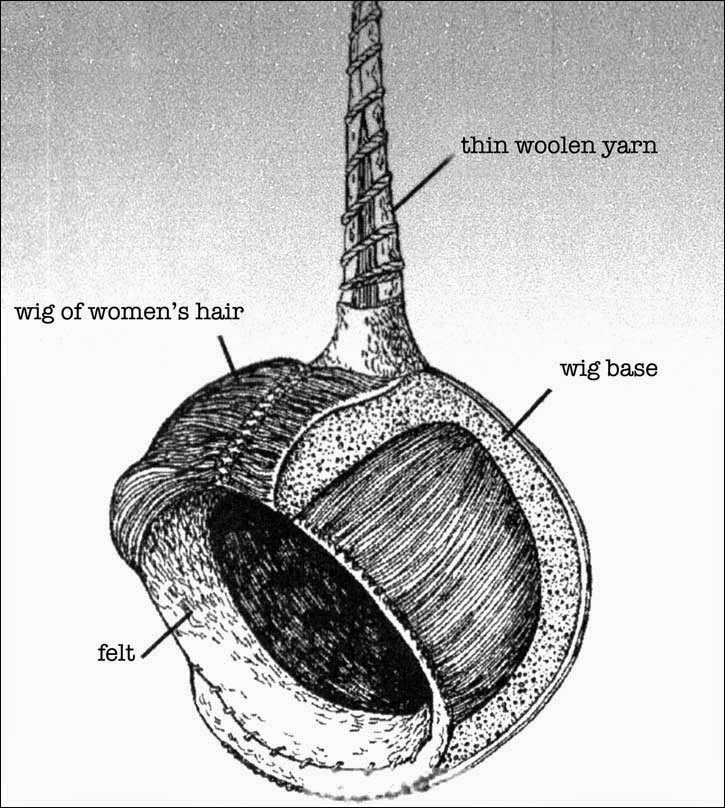 It was put on a shaved head. The base of the wig was a felt 'hat', with two layers of women's hair sewn into it. Between the layers was a black flexible substance, which helped to fix and hold the shape and the volume of the wig.'..

On top of this mop was worn a red 'nakosnik' (a braided decoration made from threads), and atop of this structure was a bronze pin with a deer, standing on a sphere. The deer was made from wood, and was covered in golden foil.'

Yet it was more intricate, still. 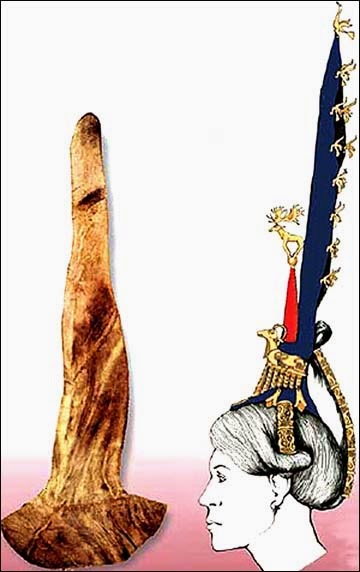 'The wig had another very important detail,' she says. Its crowning glory looked like a giant feather, 68.5 cm long, made from felt and covered with black woollen fabric, with a stick inside it to help it stand straight.' she says.

'This feather had the figures of 15 birds attached to it, which like in modern Russian Matryoshkha dolls with one inside another, were each of smaller size compared to the previous one. The birds had leather wings, tails and legs, and long necks, which most likely meant they were swans.


Remarkably she concludes that the source of the dyes is around 3,000  kilometres from Altai...

'This area can be Eastern Mediterranean - the only habitat of Kermes vermilio Planchon, a tiny insect, which is a source of nape acid, used in Pazyryk textiles colouring, and a neighbouring territory of the Armenian uplands - a source of Carminic acid. The third colourant - a source of alizarin and purpurin - was made from madder' (a Eurasian plant...

The fusion of influences, seen in her clothes, of Ancient Chinese, Iranian and Mediterranean cultures 'make the Pazyryks indeed one of the most ancient examples of synthesis between cultures of East and West'.

Several hundred years later Alexander the Great was famed for 'mixing people by the power of his will, trying to unite East and West by pushing them together, and gluing them with political methods.

'At the same time in the middle of Asia, on an immeasurably smaller scale, that process which the great warrior was only dreaming about, has been happening all by itself. That same mixing of cultures, and the mixing of Caucasian and Mongoloid....This synthesis, on a small scale, proved to be very fruitful, and resulted in a formation and rise of Gorniy Altai Pazyryk culture...

Finally, the article concludes with a discussion of the male's costume ('First of all, it had trousers - which, to remind you, was part of a wardrobe considered to be 'barbaric' by Greeks and Romans, who did not accept and did not wear them. ).  I won't abstract any more details because I feel guilty about appropriating too much material from my primary sources.  Please go to Siberian Times to read more about this fascinating story.