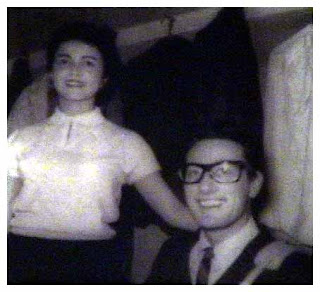 A Wall Street Journal story highlighted the history of his iconic glasses:


As one of the few optometrists in this West Texas town, J. Davis Armistead reckons he saw some 10,000 pairs of eyes over a four-decade career. But the doctor, now 96 years old and retired, still remembers one lanky youth with a vexing vision problem.

The kid couldn't see—his vision was 20/800 in both eyes, meaning he couldn't read the top line of the eye chart. But he didn't want to put on glasses for fear they would spoil the rebellious image he was trying to project as a musician. His name: Buddy Holly...

Mr. Holly had tried going without glasses, but the move backfired when he lost a guitar pick on stage, according to an account from the late Holly historian Bill Griggs. Mr. Holly also tried an early version of contact lenses, but they were so large and uncomfortable that he couldn't tolerate wearing them through a long audition, says Mr. Armistead.

So Mr. Holly started wearing glasses with a plastic-and-metal frame that were chosen precisely because of their nondescript design, the doctor recalls. All that changed when Mr. Armistead watched "The Phil Silvers Show" one night on television. The doctor noticed how Mr. Silvers, playing the role of beleaguered U.S. Army Master Sergeant Ernest G. Bilko, used his heavy black frames to accentuate his everyman persona. "The next morning I got up and said, 'This is what Buddy Holly needs.'"

Photo via Ordinary Finds.  Reposted from 2011 for "the day the music died."