More than you would ever need to know about beaver testicles 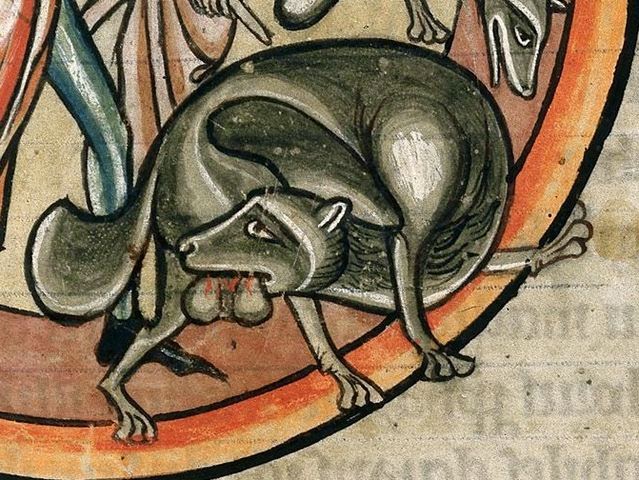 My curiosity started with the above image, from a bestiary quiz at Medievalists.net.  The creature depicted is identified as a beaver, but why is he biting his testicles?

I found a lengthy discussion of the use of the beaver in heraldry at the website of the Norton family, whose coat-of-arms depicts three beavers.


In Christian symbolism the Beaver represents chastity and the willingness to sacrifice anything that hinders one's walk with God. This icon is also a symbol of vigilance and self-sacrifice, and was often used in Heraldry as a symbol of protection and dedication...


The beaver is hunted for its testicles, which are valued for making medicine. When the beaver sees that it cannot escape from the hunter, it bites off its testicles and throws them to the hunter, who then stops pursuing the beaver. If another hunter chases the beaver, it shows the hunter that it has already lost its testicles and so is spared. The allegory is that those who want to live a proper life should cut themselves off from sin, so that the devil, seeing nothing he wants, does not pursue. 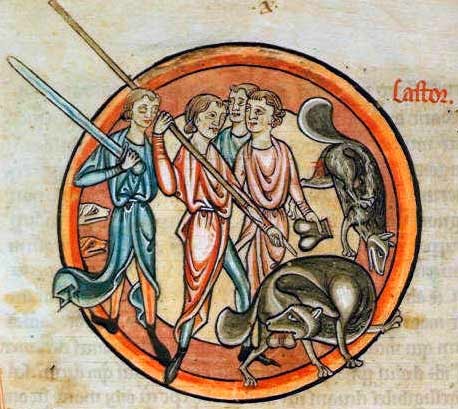 Among the many citations there is this one -


Sir Thomas Browne - Of the Bever.
(1646; 6th ed., 1672) Pseudodoxia Epidemica III.iv (pp. 124-127) CHAP IV.
THAT a Bever to escape the Hunter, bites off his testicles or stones, is a Tenet very ancient; and hath had thereby advantage of propagation. For the same we find in the Hieroglyphicks of the Egyptians[,] in the Apologue of Æsop, an Author of great Antiquity, who lived in the beginning of the Persian Monarchy, and in the time of Cyrus: the same is touched by Aristotle in his Ethicks, but seriously delivered by Ælian, Pliny, and Solinus: the same we meet with in Juvenal, who by an handsome and Metrical expression more welcomly engrafts it in our junior Memories...

- documenting the antiquity of this belief.

Finally I turned to Wikipedia for a modern take on the topic:


Both beaver testicles and castoreum, a bitter-tasting secretion with a slightly fetid odor contained in the castor sacs of male or female beaver, have been articles of trade for use in traditional medicine. Yupik medicine used dried beaver testicles like willow bark to relieve pain. Dried beaver testicles were also used as contraception. Beaver testicles were used as medicine in Iraq and Iran during the tenth to nineteenth century. Claudius Aelianus comically described beavers chewing off their testicles to preserve themselves from hunters, which is not possible because the beaver's testicles are inside its body. European beavers (Castor fiber) were eventually hunted nearly to extinction in part for the production of castoreum, which was used as an analgesic, anti-inflammatory, and antipyretic. Castoreum was described in the 1911 British Pharmaceutical Codex for use in dysmenorrhea and hysterical conditions (i.e. pertaining to the womb), for raising blood pressure and increasing cardiac output.

I presume the internal position of the testicles (as in the hippopotamus, which is notoriously difficult to castrate) is what originally gave rise to the legend of the animals self-castration.


The activity of castoreum has been credited to the accumulation of salicin from willow trees in the beaver's diet, which is transformed to salicylic acid and has an action very similar to aspirin.

- which (assuming it's true) is to me the most interesting item of the day.