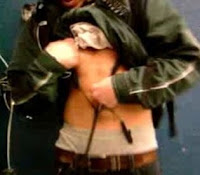 A New Hampshire high school student taking an electrical trades class "attached an electrical clamp to one nipple while another student attached another clamp to the other. A third student plugged in the cord."

He and his family are suing the school, claiming that the teacher "did not warn Dubois and other students of the dangers of the electrical demonstration cords..."

The thumbnail at left is a screengrab of a cell phone video, from the Boston Herald, which has additional details re the actions of the teacher, some of which appear to offer justification for a lawsuit.