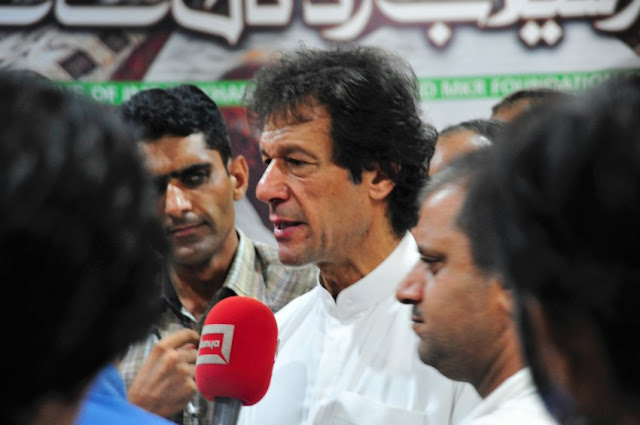 Excerpts from an article at Der Spiegel today:


"This flood in Pakistan is one of the greatest natural disasters that a nation has had to confront in recent history," he says. But the government is doing nothing, according to Khan, who says that only the military is doing good work. "Dollars, dollars, dollars," says Khan, as he runs his hand through his long hair and shakes his head. "Why do we always look abroad and expect help from there? Because we have the most corrupt, inept government of all time."

Some 20 million people, more than one-ninth of the population, have been affected by the floods. At least one-fifth of the entire surface area of Pakistan is still under water...

One thing is clear: The military is the political winner in this disaster. There are rumors that the flooding could perhaps lead to a new coup that would topple President Asif Ali Zardari. Pakistani journalists even maintain that they have been pressured by members of the army and the intelligence agency to spread lies about the government. There is virtually no way to verify these claims...

Imran Khan has read articles in American and British newspapers that argue that the Taliban could use the situation to expand their power base. "Nonsense," he says. "Pakistan is a great nation; there are 170 million of us. Does the world seriously believe that the Taliban is all that we have on our minds?"

He rolls up his shirtsleeves. His fund will be independent of his Tehreek-e-Insaf party ("Movement for Justice"), he says. "If we put aside all political differences, it shouldn't be so difficult to rebuild homes, streets and bridges."

Boston.com's The Big Picture has a set of 36 impressive photos from the flooding in Pakistan.