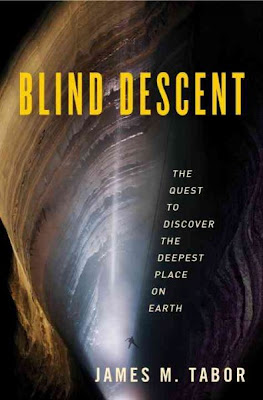 Did you read/enjoy John Krakauer's Into Thin Air about the catastrophic climb of Mt. Everest?  How about Endurance - the saga of Shackleton's voyage to the Antarctic?   If you like adventure-based literature, you would probably enjoy reading this book about the exploration of supercaves.  It details the "race" between two groups of cavers - one exploring a Mexican cave, the other a cave in the Caucasus - trying to establish a new record for reaching the bottom of the deepest cave on earth.


Instinctively, he lunged to grab the rope and dangling rappel rack. Had he been carrying no pack, or even a light daypack, it's possible that he might have saved himself by holding onto the rope, or to the anchor bolted to the wall, or perhaps even setting up something called a body rappel. But that would have required almost superhuman strength and would have been extremely difficult even without any load. His 55-pound pack made any such self-arrest impossible, and in another instant he was dropping through space. He fell so quickly that he did not even have time to scream.

A more thorough review of the book is posted at NPR's website.  The book is an easy read in a reasonably brief 250 pages which can be consumed in an evening.  If you're interested in the subject matter, but don't have even that much time, here is a TED talk by one of the subjects of the book, Bill Stone, who extrapolates from his caving experience to speculation about the exploration of other planets: