Bifocal eyes in the natural world 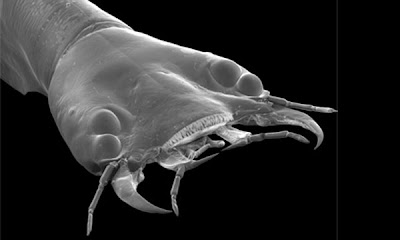 The image above is a scanning EM of the head of the larva of a sunburst diving beetle.  It looks like it has two pairs of eyes, but it actually has six pairs of eyes, some of which are capable of bifocal vision.


Each of [the two front] tube-shaped eyes has one lens and two retinas. One retina lies behind (and slightly below) the other but the lens manages to focus sharp images onto both of them. Humans might be able to adjust our lenses to focus on objects at different distances but the sunburst beetle can see things that are close up and far away at the same time, and with equal sharpness.

The other four pairs are a different story. “They tend to have much larger visual fields and they might be tuning in to motion.”

It is possible that the trilobites possessed similar eye structures.  More details (and a video) are available at Not Exactly Rocket Science.