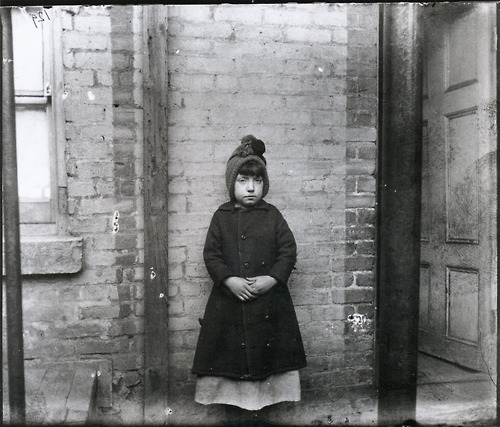 “When Riis met nine-year-old Katie at the 52nd Street Industrial School, he asked what kind of work she did, and she answered, ‘I scrubs.’ Katie and her three older siblings took their own flat after their mother died and their father remarried. The older children worked in a hammock factory, and Katie kept house. When asked if she would pose for this picture, which appeared in Children of the Poor, Katie ‘got right up … without a question and without a smile.’”

A nine-year-old girl scrubbing floors to support herself.  As the U.S. struggles through this ever-lengthening and deepening recession, I think the above photo and attendant story are worth keeping in mind for anyone tempted to feel sorry for their own economic misfortunes.

Photo and quotation found at (OVO), via The Fighting Temeraire, or Everything 19th Century.