The slot-and-tab tombs of Georgia 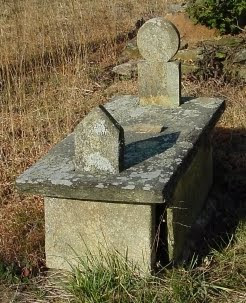 
...an oblong horizontal lid (ledger stone) made of local soapstone (local greenish-grey soft chloritic schist) with two slots cut into it, through which the vertical head and foot stones are fitted, called a 'through mortise-and-tenon joint' in woodworking. The ledger stone is thus suspended over an internal empty cavity... to create an above-ground stone box monument that resembles a tomb. The body is presumably underground since no remains have been seen inside exposed internal cavities.

The website catalogues 166 such tombs found in rural northeast Georgia, most for English or Scotch-Irish families, and dating from the late 19th century.

It looks like something a furniture-maker would have crafted, rather than a stonemason.  More details at the link, which is quite nicely doe.