The "Detention Bill" proposed by McCain and Lieberman 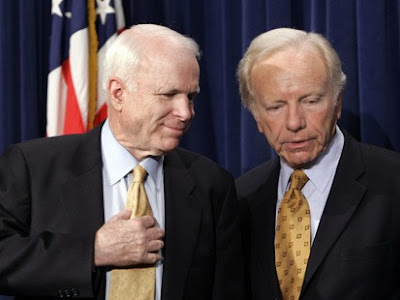 A person suspected of terrorism or of aiding terrorists would be handled by the military, not civilian jurisdiction.  The person would be denied any Miranda rights:


(3) INAPPLICABILITY OF CERTAIN STATEMENT AND RIGHTS- A individual who is suspected of being an unprivileged enemy belligerent shall not, during interrogation under this subsection, be provided the statement required by Miranda v. Arizona (384 U.S. 436 (1966)) or otherwise be informed of any rights that the individual may or may not have to counsel or to remain silent consistent with Miranda v. Arizona.

The person can then be detained without trial, indefinitely:


An individual, including a citizen of the United States, determined to be an unprivileged enemy belligerent under section 3( c)(2) in a manner which satisfies Article 5 of the Geneva Convention Relative to the Treatment of Prisoners of War may be detained without criminal charges and without trial for the duration of hostilities against the United States or its coalition partners in which the individual has engaged, or which the individual has purposely and materially supported, consistent with the law of war and any authorization for the use of military force provided by Congress pertaining to such hostilities.