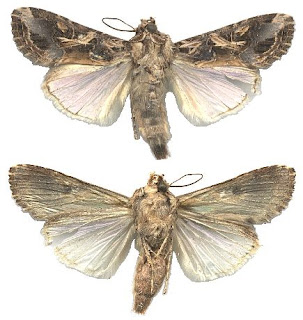 I didn't know until this morning that some moths use ultrasound (I thought it was an ability limited to bats).  But this report makes sense from an evolutionary standpoint:


It has been proposed that intraspecific ultrasonic communication observed in some moths evolved, through sexual selection, subsequent to the development of ears sensitive to echolocation calls of insectivorous bats. Given this scenario, the receiver bias model of signal evolution argues that acoustic communication in moths should have evolved through the exploitation of receivers' sensory bias towards bat ultrasound. We tested this model using a noctuid moth Spodoptera litura, males of which were recently found to produce courtship ultrasound. We first investigated the mechanism of sound production in the male moth, and subsequently the role of the sound with reference to the female's ability to discriminate male courtship songs from bat calls. We found that males have sex-specific tymbals for ultrasound emission, and that the broadcast of either male songs or simulated bat calls equally increased the acceptance of muted males by the female. It was concluded that females of this moth do not distinguish between male songs and bat calls, supporting the idea that acoustic communication in this moth evolved through a sensory exploitation process.

Note that this is "courtship ultrasound," clarified as follows:


He is a trickster. By mimicking the sound of a bat, he fooled the female into keeping still, making her easier to mate with.

I suppose one could come up with a human behavior counterpart...