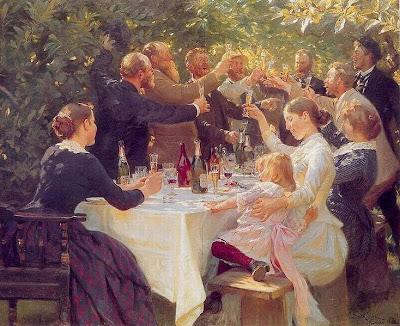 It's Sunday morning.  Replete with eggs and toast and having finished the NYT crossword, it's now time to blog.  I've allotted myself half a day to blog 68 items I've bookmarked since last week.  Let's start with a quick smörgåsbord of selections.

An attorney in Texas left his (expensive, leather) coat behind in an airport pizza place.  Now he's threatening to sue the City of Houston, Continental Airlines, and the food court for not securing his coat for him.   He won't sue if they give him $800.  It's people like him that give the other 10% of attorneys a bad reputation.  Details and a copy of his threatening letter at The Smoking Gun.

For the 2012 London Olympics "Police will have powers to enter private homes and seize posters, and will be able to stop people carrying non-sponsor items to sporting events."  Link to the story and discussion at Reddit.

A nice photoessay about galls.

Victims of Hurricane Katrina in Mississippi want to sue someone, so they are suing multinational oil companies for causing global warming.

Two adults in Argentina killed themselves and shot their two children because they feared the effects of global warming.

Sweden is experiencing record-setting cold temperatures, one town recording "the longest consecutive period [of sub-zero temperatures] since records began in 1875."

A New Mexico spa is now offering a Japanese Nightingale Facial.  The "nightingale" part refers to the bird poop they will smear on your face: "Uguisu no Fun's main effect - that being bleaching and exfoliating the skin - is a result of Guanine, a naturally occurring enzyme [sic] found in nightingale droppings."

A ten-minute video about the making of David Attenborough's "Life" series for the BBC.  I'm alternately impressed and dismayed by the use of computer graphics to enhance the filming.

A bar graph depicts the number of saints beatified by popes.  For whatever reason, the number is skyrocketing.  Is it a long-term trend, or is it another one of these "bubbles"??

A quick video on CNET explains that you can bypass all those annoying previews on a DVD by pressing stop-stop-play when the trailers start. (warning: this video autostarts).

A preliminary survey by a gas company preparing to construct a gas pipeline has discovered that the floor of the Baltic Sea is littered with shipwrecks.  Not surprising per se, but the cool aspects are that some of these are expected to be 800+ years old, and the waters of the Baltic have lower salinity than other oceans, so there are no ship worms to eat the wooden wrecks, so just like the Black Sea there will be some impressive findings when these are explored.

Reindeer do not have circadian clocks.  They live at a latitude where day length varies from zero to 24 hours, so it makes sense to have evolved an "off switch."

Continental Airlines will no longer provide complimentary food on flights of less than six hours duration.

If you're not already enraged about how airline travel has changed, watch some of these videos of baggage handlers abusing luggage.  (Addendum:  one reader has encountered one of those fake "Your computer is infested with viruses" notices at this link).

You should use much less soap in your dishwasher and washing machine.  Modern machines use less water and need less soap, and the soap is more powerful than it used to be.  "Most people use 10 to 15 times the amount of soap they need."

A comprehensive article about the history and economics of the hemp industry, and why "ditch weed" can still be found growing along roadsides.

A conservative commentator says Sean Hannity has been supporting a scam, because the "Freedom Alliane" that he promotes primarily supports itself rather than wounded soldiers.

"Stacked words" are one of the items that copyeditors and proofreaders look for and try to correct.