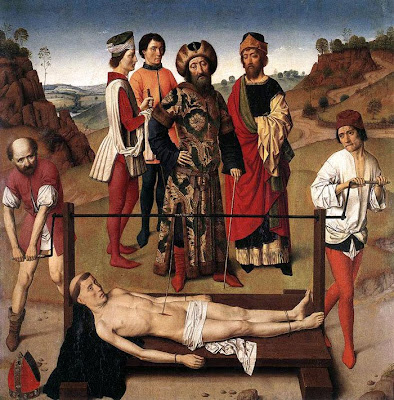 This guy was tougher than Rasputin:


...he was "put into a pan seething with rosin, pitch, brimstone lead, and oil, [which were] pour[ed] ... into his mouth, [from] ... which he never shrinked." A searing hot cloak and metal coat were both tried on him, to no effect, and an angel eventually carried him away to safety."

His teeth were ... plucked out of his head with iron pincers. And after that they bound him to a pillar and carded his skin with iron cards, and then they roasted him upon a gridiron...and did smite sharp nails of iron in his fingers, and after, they put out his eyes of his head with their fingers, and after that they laid this holy bishop upon the ground naked and stretched him with strong withes bound to horses about his blessed neck, arms, and legs, so that all his veins and sinews that he had in his body burst."

He recovered from all that and more, but reportedly died when his small intestine was wound out on a windlass.  Wiki notes that "this late legend may have developed from interpreting an icon that showed him with a windlass, signifying his patronage of sailors."

Found at All Things Beautiful.