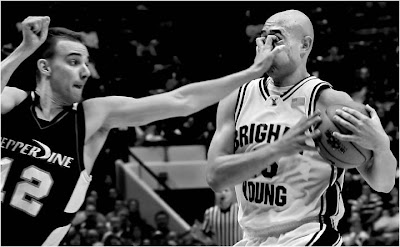 Since "March Madness" is currently underway, this seems an appropriate time to post the background behind this remarkable photo.

It's real - NOT 'shopped.  I had seen it posted in various places, always without explanation.  I finally found a webpage where the photographer who took the photo explains what happened:


Pepperdine's Jason Walberg was guarding him and so I began shooting a sequence of pictures. As I was tracking the action, I thought I saw Walberg's hand hit Tavernari's face. Jason squinted his eyes but continued going up for the basket. Although he missed the point, he stayed in the game and the official didn't call a foul. So, I kept shooting the game and didn't realize the picture I had just made.

More at the link, with a reassurance that the player's eyes were not apparently significantly injured.