The Fibonacci sequence of the sunflower


The video above is the impressive "Nature by Numbers" video, which almost everyone has posted this week.  The Nautilus and sunflower analogies are pretty well known, though this was my first encounteer with the mathematics of a dragonfly's wing.

Here's some additional commentary on the sunflower's remarkable structure:

In order to optimize the filling [of the flower head with seeds], it is necessary to choose the most irrational number there is, that is to say, the one the least well approximated by a fraction. This number is exactly the golden mean. The corresponding angle, the golden angle, is 137.5 degrees. (It is obtained by multiplying the non-whole part of the golden mean by 360 degrees and, since one obtains an angle greater than 180 degrees, by taking its complement). With this angle, one obtains the optimal filling, that is, the same spacing between all the seeds.

This angle has to be chosen very precisely: variations of 1/10 of a degree destroy completely the optimization. When the angle is exactly the golden mean, and only this one, two families of spirals (one in each direction) are then visible: their numbers correspond to the numerator and denominator of 2 consecutive numbers in the Fibonacci sequence, which is proved to converge toward the Golden Mean value of 1.6180339... (in the picture we have 21/34, the 7th and 8th terms of the Fibonacci sequence).

Moreover, generally the petals of flowers are formed at the extremity of one of the families of spiral (true, I count 34 for this sunflower). This then is also why the number of petals corresponds on average to a Fibonacci number.

Via the Flickr photostream of lucapost, whence also the illustrative image below. 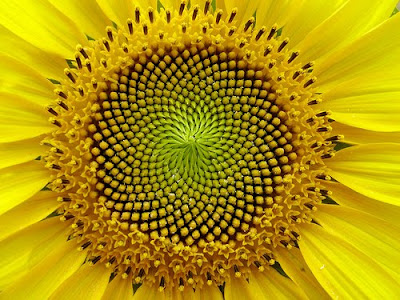