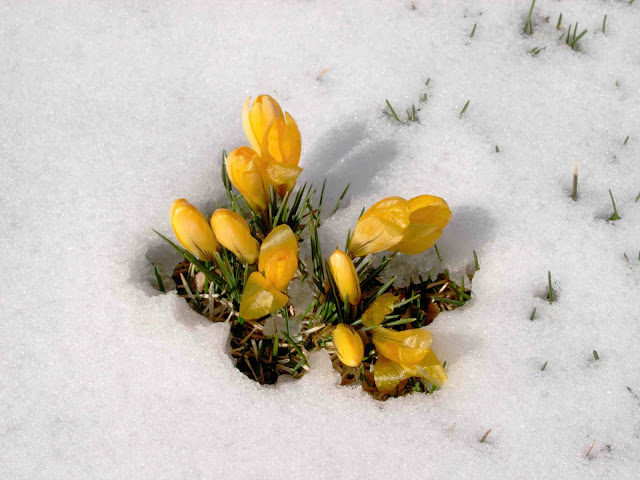 At our house the seasons are not defined by solar cycles, but by the cycles of various living things.  Friday brought the first robins to our woods and lawn, and yesterday the first crocuses bloomed.

Crocuses are amazingly hardy plants; at our latitude they begin their emergence even before the snowpack has melted.  Presumably this reflects an evolution occurring through domestic breeding, because the first wildflowers in our hardiness zone are the pasqueflowers, which don't appear until mid-April.

Some years ago we began planting crocuses not just in the flowerbeds, but also in scattered locations around the front lawn.  In a week or two the yard will be a mosaic of different colors from the clusters of crocuses: 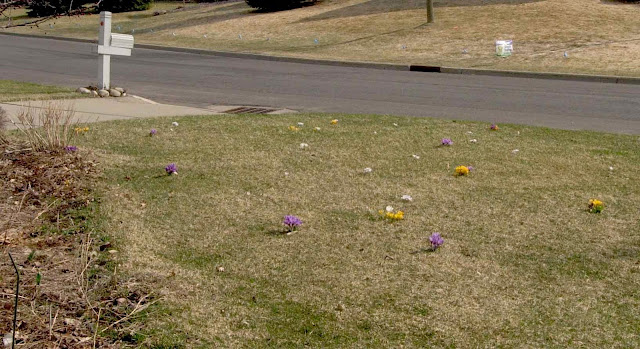 The colors will be there for a few weeks to brighten our day and that of passers-by, and then the leaves will persist for a few more weeks, soaking up the energy needed to replenish the bulbs.  Those leaves start to wilt about the same time the grass starts to grow and it becomes necessary to mow the lawn (may have to mow around them once, then they're gone.)

The crocuses (croci is apparently also permissible) multiply by bulb division rather than by seed, so they don't spread widely.  This year I'm going to put pennies down into the clusters of blossoms so that I can find them again later in the year, when I'll lift up the turf, divide the bulbs, and spread them out.

Spring Cleaning
For now, all the crocuses require is watching, but they mark the beginning of a busy year for garden and outdoor enthusiasts.  This was a long, cold winter with a deep snowpack that broke branches on shrubs, including our juniper and lilac.  In the woods are some dead trees that need to come down before the beetles outnumber the woodpeckers.  As we try to reclaim the woods from the invasive buckthorn and honeysuckle that were there on our arrival, we'll be putting down more native plants and trying to stabilize slopes against erosion.  We tell ourselves it's fun, which is true until the mosquitoes arrive, so spring is a prime working season.

Butterfly Gardening
I have a subsection of TYWKIWDBI devoted to posts about butterflies and moths - some of it cut-and-paste material from conventional web sources, and some of it relating our own amateur but enthusiastic attempts to protect lepidoptera and encourage their survival and reproduction.  We do this partly because their populations are under severe pressure from habitat loss, but mostly because it is absolutely fascinating.

We have both host plants (food for caterpillars) and nectar plants (food for adults) in the garden.  This year I'm adding some cabbage plants, not to harvest the head, but to support cabbage white butterflies.  I'll soon be starting hollyhock seeds for the Painted Ladies and Hairstreaks, and will be putting out carrots for the Swallowtails.  There's already an abundance of milkweed (both Common and Swamp) at the front, back and side of the house.

March Madness
The other herald of spring here is a pair of state high-school basketball tournaments - one for boys and one for girls.  That will bring thousands of people to town this week and next, including some of our family, which in turns means it will be time for some marathon Scrabble games and takeout Chinese food and trips to the bowling alley.

The Outdoors Beckons
We are not winter sports enthusiasts, so the first days of 60 degree weather are like a release from prison.  Yesterday we were out for our first hike in a park - just a few miles through open fields, because the woods still have some ice on the trails (not pleasant for the stumble-prone).  We did see our first caterpillars of the year - Ctenucha Moth cats.  It won't be long before the field trips start, by the Southern Wisconsin Butterfly Association, our local gardening group, and our regional rock and mineral club.

For me and probably for others, there is a certain degree of frustration that comes from encountering truly open-ended tasks.  I was good in a lab, setting up procedures and controls, compiling data, analysing it, researching literature, writing etc.  It all occurred within certain defined parameters.  Surfing the net for bloggable items is a neverending task and clearly falls into the category we used to speak of at the university of "work expanding to fill the time allotted to it."

When I started the blog 2+ years ago I was naive enough to set aside bookmark folders for things I didn't have time to blog but wanted to save "for days when I couldn't find other material."  There have never been such days, and the bookmarks continue to accumulate.  Last month I sat down for two days and weeded them out.  Hundreds of them had undergone "linkrot" where the primary source (typically a newspaper story) was now unavailable.  Others had resolved themselves, or gone viral to be seen by everybody, or were simply no longer relevant (politics, current events, economics).

The rest of the links I gathered into folders in groups of twelve - that being a convenient number of tabs to open next to the blog-writing tab.  When I reached twelve folders, I grouped them into another folder of the "first twelve twelves."  I wound up with five "twelve twelve" folders.  Then six more "recent twelves."  And now about 40 more links just tucked at the bottom of the list.   That's some 800 bookmarks of items I had intended to blog.  It's ridiculous.  And unworkable.

I had a career that involved 55-60 hour weeks, which eventually led to a degree of professional "burnout."  The passion for the work began to be overshadowed by the burden.  I don't want that to happen to the blog.  I started creating a few dozen posts a week for a few dozen friends and family.  In two years it has morphed into a few hundred posts a month for several thousand visitors.  I've been reassessing the situation in recent weeks, and have decided to refocus my attention on other matters.

No More Two-Headed Cats
Starting now, and for the foreseeable future, TYWKIWDBI will be updated once a week.  Maybe twice, if its rainy or something unusually interesting occurs.  This will entail some decrease in the volume of posts, but the bigger difference will be in the frequency; those who visit just once a week will just see fewer items each visit.  Those who come here on a daily basis will be more disappointed by seeing nothing new for days at a stretch, and should adjust accordingly.

The other change will be in the content.  I need to get back to first principles, which were incorporated into the first four letters of the acronym - TYWK - "things you wouldn't know."  Lured by the fun of blogging, I have been gradually shifting my focus, which during the past year included too much stuff that went viral.  It's tremendously tempting when you encounter a story like "Two-headed Cat Saves Family From Burning Building" to add it to the blog, but that kind of story will be captured at Arbroath and at Neatorama and at Presurfer and at BuzzFeed.  There's not much point in my posting material that you can find at The Daily Dish or HuffPo or Metafilter or BoingBoing.

I'll still look at those sites on a regular basis to keep myself informed about what's new in the world.  I'll still read the NYT and the LA Times and the Star Tribune and I'll try to keep track of new memes, but I won't be reposting them here.  You are cordially invited (encouraged) to browse through the blogrolls in the right sidebar for sources of much of the material you've seen here in the past.

When I do find cool stuff that I want to post here (for my own future reference, or for your entertainment), I now plan to post that material more often in the format of a linkdump, similar to what I do with material I write for Neatorama, or the ~monthly linkdumps I've been calling "smorgasbords" and using as a decompressive measure for accumulated links.  There are, of course, entire blogs composed of nothing but linkdumps; the most successful and interesting example in my view being Dark Roasted Blend.  I don't want to go quite that far.  TYWKIWDBI will have more linkdumps, but will continue to have text-and-photo posts.

Expect More Original Material
There is, of course, very little in most blogs that is truly "original" unless the blogger is offering you his/her personal experience, opinions, photography etc.  Most blogs are compilations of material found elsewhere.  The power and attractiveness and indeed the success of a blog depends on the selection process.

Blogging is not unlike cooking.  Give some people a well-stocked kitchen and they will come up with scrambled eggs and toast.  Another person in the same kitchen will serve you eggs Benedict.  The ingredients available to any blogger are immense beyond comprehension; the blog itself reflects how those elements are selected and combined.

If there is any compensation for the decreased volume of material to be presented in the "new, revised" TYWKIWDBI, it will have to come through offering material not as readily encountered elsewhere.  I'll continue my butterfly/moth posts for the few who are interested, but will also do more of my book summaries and guides to other blogs.  I also have piles of material on my desk extracted from magazines like The Atlantic and Harper's and Smithsonian; these things are available online, but they typically don't get much attention.

And the text/picture posts I write will now come more often from the obscure corners of the blogosphere and less often from the mainstream sites that you probably read anyway.

We'll see how this works out and we'll hope for the best.

Addendum:  Just realized now I have to change "incessantly" to "intermittently" in the header photo.