A postmortem photo of a little girl with a drum 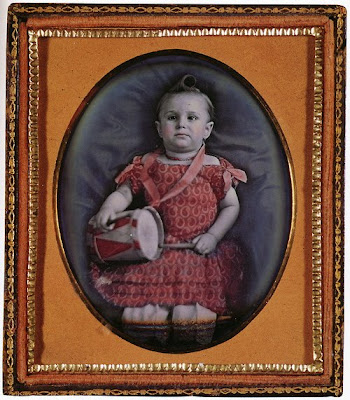 Twice last year I posted examples of postmortem photos (here, and here).  I'll do one more in order to show this tinted daguerrotype of Sarah Lawrence from the mid-nineteenth century.


Certain conventions, such as flowers in one hand or a recumbent pose, are typical of early postmortem portraiture, and were not generally used in portraits of the living. The cloth behind this girl is another fairly good sign of a postmortem photograph; the wrinkles in it show she was lying down or propped up against it...

Posthumous mourning painting was a socially acceptable part of American and European culture in the 19th century. The environments of these paintings varied from clouds to scenes of everyday life. This practice and style of representation continued in photography. In “posthumous mourning photography,” however, the range of possible presentation was limited. In paintings, any scene could be presented because it was a secondary rendition limited only by the imagination and talent of the artist. In many of these paintings, however, the deceased was presented with an object associated with death, such as a clock, wilted flower or willow tree. This daguerreotype uses a drum as the death-associated object...

From Sleeping Beauty II - Grief, Bereavement and the Family in Memorial Photography by Stanley B. Burns, M.D.