Surprising quantities of water on the moon! 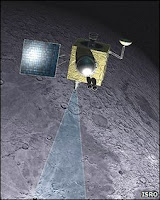 Data from three spacecraft, including India's Chandrayaan probe, shows that very fine films of H2O coat the particles that make up the lunar dirt...

The rock and soil samples returned by the Apollo missions were found to be ever so slightly "damp" when examined in the laboratory, but scientists could never rule out the possibility that the water in the samples got in only after they were hauled back to Earth.

Now a remote sensing instrument on Chandrayaan-1, India's first mission to lunar orbit, has confirmed that there is a real H2O signal at the Moon.

Two other satellites to look at the Moon - the US Deep Impact probe and the US-European Cassini spacecraft - back up Chandrayaan.

Both collected their Moon data long before Chandrayaan was even launched (in the case of Cassini, 10 years ago), but the significance of what they saw is only now being realised.

"If you had a cubic metre of lunar soil, you could squeeze it and get out a litre of water," explained US moon researcher Larry Taylor...

They call that a "tiny" amount, but it seems like a lot to me, since I grew up believing the moon was absolutely dry and sterile. Initial speculation is that it could be hydrolyzed for fuel rather than harvested for consumption.