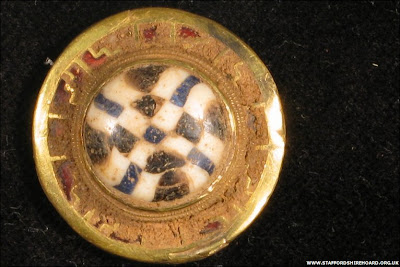 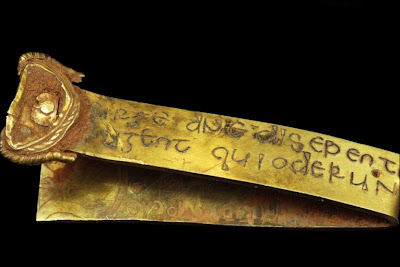 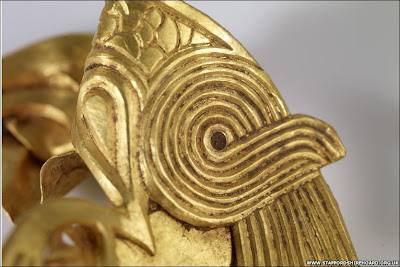 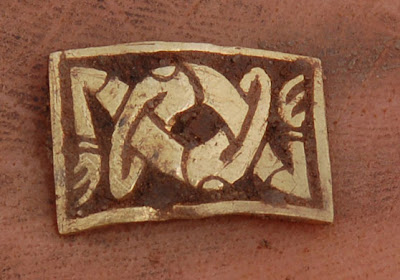 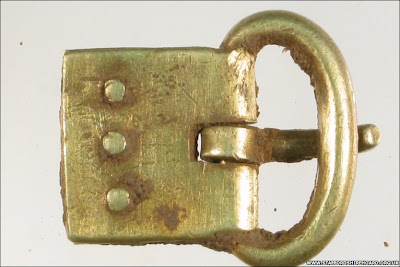 I said yesterday that I wouldn't be double-posting material that I write up for Neatorama, but I'll make an exception for this once-in-a-lifetime event, and because here I can post more of the spectacular photos and append some thoughts of my own.

The news coming out of Britain today is of the greatest treasure hoard ever discovered on the British Isles - perhaps the finest in European history. Found by an amateur with a metal detector, the assemblage totals perhaps 1,500 items (they're still extracting them from lumps of earth), dating to the 7th century.

It's gold and silver, but it's not just coins. Included are clothing accessories, jewelry, and lots of armor- and war-related items. Every item appears to be designed for males, so the supposition is that this was the spoils of battle (or the accumulation of a lifetime in the military). The gold pieces are beautifully crafted with filigree and inlaid precious stones (garnet) and glass.

Pictured above, top to bottom, are a millefiori stud with an inlaid glass mosaic, a gold band with a Biblical phrase (in Latin) from Psalm 67, part of a design of two eagles and a fish, a plaque with stylized interlaced arms, a decorated dagger hilt, and an apparently solid gold buckle and plate.

I've spent a long time trying to wrap my mind around this discovery - reminding myself that this treasure didn't come from the time of Elizabeth. These were made a THOUSAND YEARS before she was on the throne. These predate the Plantagenets and the Normans. This is before King Canute challenged the tide. Before Alfred the Great, for cryinoutloud. These were buried before there were English kings. Before there was an England, if I may be permitted to say such a thing (although I guess there would have been a "Britain.")

Someone buried this treasure during the Dark Ages - a time when one tends to think of men scrabbling about wearing animal skins and fighting with pointy sticks. But behind them on the battlefields there must have been magnificent warriors resplendent in gold and silver and probably elaborate silks and woolens that haven't survived. It boggles my mind.

One other comment, which I may have expressed on this blog before. The Brits are to be endlessly commended for their thoroughly enlightened policy regarding the discovery of buried treasure. The law of the land gives half the value of the find to the person who discovers it. In many (?most) countries the government tries to confiscate anything found or repatriate it to presumed descendents, with the result that magnificent finds like the above from the whole of the world's history are routinely sold on the black market to wealthy people who hide it, or worse yet, melted down for base metal value by "potholers" ravaging archaeologic sites. Kudoes to the Brits for rewarding the finders and preserving their heritage.

Here are some relevant links (including credits for the photos above) -

Link to BBC article with a slideshow of 12 photos.

Link to a gallery of 15 photos at The Guardian.

The Stafforshire Hoard, is the “home page” for the find, which is being co-managed by the British Museum, English Heritage, the University of Birmingham, and others. There are 619 photos at the site, but the server is very slow today - presumably nearly overwhelmed with traffic.

Update Nov 26: The hoard has been appraised at £3,285,000, which will be split between the man who found it and the farmer on whose land it was located.