A rotating dining room - built by the Emperor Nero! 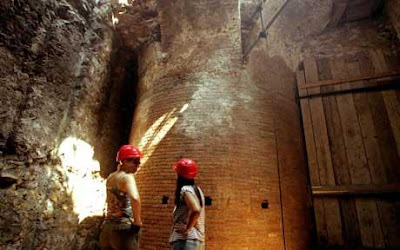 Remains of the fabled dining hall have been discovered on the city's Palatine Hill, where emperors traditionally built their most lavish palaces.

The hall is said to have had a revolving wooden floor which allowed guests to survey a ceiling painted with stars and equipped with panels from which flower petals and perfume would shower onto the tables below...

The Roman historian Suetonius described the unique revolving room in his Lives of the Caesars, written about 60 years after Nero's death.

"The chief banqueting room was circular and revolved perpetually, night and day, in imitation of the motion of the celestial bodies," he wrote.

The BBC has a video which explains that the rotation of the room was powered by water.