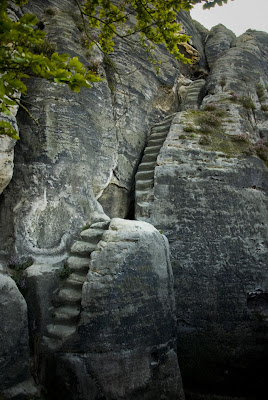 Obviously carved into fissured rock on the side of a mountain, with a cross carved next to the steps. Photo found at Pixdaus without further identification or credit re source, and with tags indicating "Anglo-Saxon" and "england," which surprises me a little. It looks more like something that might have been created in central Europe or perhaps a monastery in the Greece/Adriatic area. Does anyone recognize it? (Click to enlarge)

Addendum - identified by Anonymous as follows "Stony stairway from the 13th century. The stairway is part of a rock castle in the mountains “Elbsandsteingebirge” in Sachsen, Germany." Continuing a string of my never being able to ask a question here that someone didn't have the answer to. Amazing. Thanks.