"The Marine Corps is at war; America is at the mall" 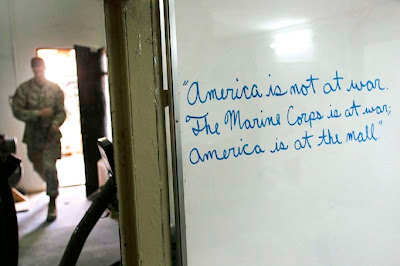 Major Rossi and other critics of the A.P.’s decision asserted that the photo was not enlightening at all. They said the public already well understood the peril and tragedy of warfare, concluding that the use of such a graphic picture was shamelessly voyeuristic and needlessly traumatizing (especially to the Bernard family, in their time of grief), motivated only by news organizations’ desperate search for readers and revenue.

Advocates said Ms. Jacobson’s picture captured the reality of war — and its awful price — as have few other images in the eight years that American troops have fought in Afghanistan and Iraq. In conveying that information to the public, they said, the A.P. and its members were fulfilling a journalistic obligation and playing a vital role in a democracy. In any case, they said, the picture painted an unsparingly accurate — if deeply troubling — picture.