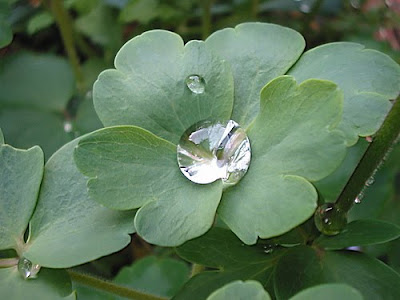 "IN the Summer, after some days of fine weather, during the heat of the day, if a storm happens, accompanied with a few light showers of rain; and if the Sun appears immediately after with all its usual ardour, it burns the foliage, and the flowers on which the rain had fallen, and destroys the hopes of the orchard. The burning heat, which the ardour of the Sun produces at that time on the leaves and flowers, is equal to the intense heat of burning Iron. Naturalists have sought for the cause of this strange effect, but they have said nothing which satisfies a reasonable mind. This is, however, the fact. In the serene days of the Summer, it is visible that there gathers on the foliage and the flowers, as, indeed, on every other part, a little dust, sometimes more and sometimes less, scattered by the wind. When the rain falls on this dust, the drops mix together, and take an oval or round form, as we may frequently observe in our houses, on the dusty floor or cieling, when they scatter water before they sweep them. It is thus these globes of water, mingled on the foliage, form so many of those convex glasses which we call Burning Mirrors, and which produce the same effect. Should the rain be heavy and last long, the Sun would not then produce this burning heat, because the force, and the duration of the rain, will have destroyed the dust which formed these drops of water; and these drops, losing their globular form, in which alone consisted their caustic power, will be dispersed without any extraordinary effect. For this observation, which, to the Naturalist must appear curious and novel, he is indebted to the ingenious Huet, Bishop of Avranches."

From Curiosities of Literature, "a compilation of book-lore whose first volume was issued in 1791."


Addendum: Sometime during early 2010 I read an article that dismissed this old observation as nonsense, but I didn't bookmark the link.