Dumping milliions of gallons of milk on farm fields 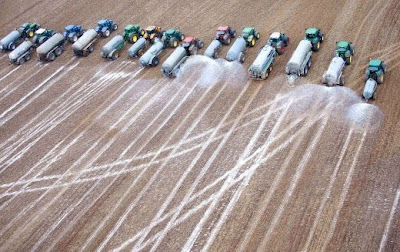 Dairy farmers throughout Europe sprayed about three million liters of fresh milk onto fields and roads to protest milk prices that have fallen so far -- 40 percent since spring -- that they have been unable to pay their bills. In the small town of Ciney in Belgium, where about 2,000 dairy farmers took part in the demonstrations, milk was sprayed onto fields and roads. A day's worth of milk production was dumped to highlight the dairy farmers' plight.

On the surface this appears to be a report of unfortunate farmers protesting their mistreatment by adverse market conditions. Falling prices are, however, part and parcel of a receding economy, just as surging prices accompany a boom. Most agricultural communities and other commodity-based businesses have in place some mechanism by which farmers/miners/manufacturers can hedge their risk, purchasing or selling options and futures on the price of their product in order to guarantee a sale price well in advance. When done properly, the businessman or farmer can lock in a modest profit. Some choose to ignore these opportunities and instead hope that commodity prices will rise and/or that fertilizer and other costs will fall, allowing them to make a much larger profit.

I obviously don't know the details of the situation in Europe; it's possible that some government interventions or policies have screwed things up. Half of my genes come from a dairy and corn farming background (the other half from railroad workers), so I'm sympathetic to the difficulties and risks inherent in farming, but I'm also aware that there are risk-takers on farms just as there are risk-takers on Wall Street.