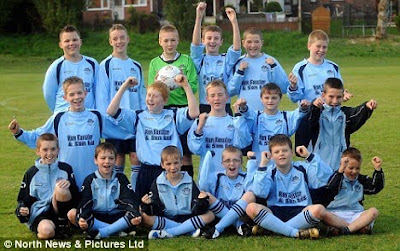 ...in ending a three-year losing streak, Harraby Athletic's teenage players have proved their passion and dedication to the beautiful game.
The under-14 squad - dubbed ‘Britain's worst football team’ – were thrashed 19-0 in their first ever game and they went on to endure a painful 90-game losing run...
The team regularly concedes more than 10 goals a game and their luckless keeper has picked the ball out of the net more than 400 times in three seasons.

Harraby Athletic have collected just one point in the Longhorn Youth Football League since their formation - and that was only because the opposing team didn't turn up for a game last year.
Brett paid tribute to the spirit of his team which is made up of players who had either never played for anyone else or had been rejected.

TYWKIWDBI sends congratulations; this is what sport is really all about. I'll bet these young men remember the victory more than the 90 defeats, and have probably gained more from athletics than some of their more "successful" colleagues.