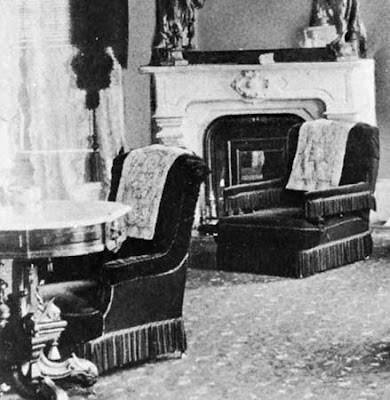 Antimacassars are protective coverings placed over the back of a chair or sofa. "The original antimacassars were made of stiff white crochet-work, but later soft, coloured materials, such as embroidered wools or silks, were used. In the 20th century the use of antimacassars largely died out." The ones in the illustration are from the Palmer House in Chicago in 1875 (which, parenthetically, is where American Airlines boarded their crews when my mom was a stewardess for them in the early 1940s).

As Britannica states, their use is now uncommon, but as Wiki notes and illustrates with the second image above, those napkin-like coverings over airline seats are also "antimacassars."

So, if those are ANTI-macassars, there must be a "macassar." There is. It's a bustling city of a million people on Sulawesi Island, Indonesia. In the Victorian and Edwardian periods of the 19th century, it was the source of "macassar oil," a concoction of coconut oil or palm oil with ylang-ylang oil, which was used as a hair oil with such frequency (and in such quantity) that householders had to resort to placing doilies over the backs of chairs to prevent them from becoming permanently stained with oil. These then came to be called "anti-macassars."

And now you know the REST of the story.