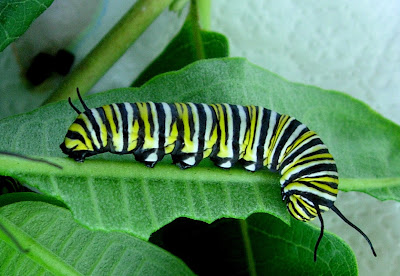 I have previously posted about the appearance of Monarch butterfly eggs on milkweed, and the development of the first instars.

We now have dozens of healthy juveniles, some over an inch long and probably mature enough to begin forming a "J" (more on that when it happens). Mature caterpillars are voracious feeders, stripping milkweed leaves down to the spine; they seem to grow exponentially in body size, and in the process produce enormous amounts of "frass" which falls to the bottom of the container.

Interestingly, "frass" is not in all dictionaries, including the Random House one. In addition to caterpillar poop (discreetly referred to as "excrementious matter" in the OED), it also is used to refer to refuse ("rejectamenta") left behind by boring insects (termites, wood beetles, worms in apples, etc.). The word is derived from the German "fressen," meaning "to eat" (from whence also the English word "fret" in the sense of eroding, wearing away, gnawing by small animals, or champing at the bit by large ones - but not the musical instrument frets, which term is of different, uncertain origin).