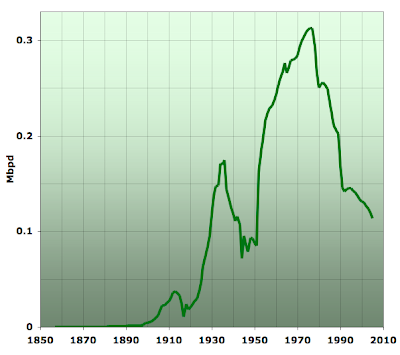 Posted for the sole purpose of noting the interesting observation it was the country of Romania that had "the world's first commercial-scale oil production" in 1857. I wouldn't have guessed that if you had given me 300 guesses.

Credit to the Oil Drum, whence also the image. It is in my view the single best source for extended in-depth discussions of the petroleum industry, with a readership heavily weighted toward scientists and industry insiders. Rightly or wrongly there does seem to be a bias toward "peak oil" (as you might have guessed from the nature of the imbedded image).

And speaking of "Romania"...