The Case of the Exploding Knitting Needle 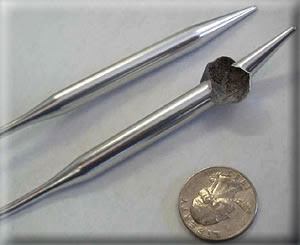 "It was just an ordinary day. It was, in fact, a flawlessly sunny, not-too-hot, not-too-cold first of August, 2004. My husband and I were returning home from a camping trip in the Olympic Mountains. As is often the case, he was driving; I was knitting.

A tremendous blast deafened us both. Bless my husband's long experience as a volunteer ambulance driver; he pulled us to the side of the road without mishap. We sat there shaking and asking each other, "What was it? What just happened?" It sounded exactly as though someone had stuck a rifle barrel in the window, and fired. But there was no visible damage: no shattered glass, no holes anywhere, no blood. Besides, we had been traveling at 50 MPH on an open road.

Then I glanced down at the knitting in my lap. One end of the circular needle I was using had blown open (see photo). My right index finger was beginning to swell, discolor, and throb. Whatever residue was inside the needle, or maybe just the blast of released air, had hit my finger with enough force to cause tissue trauma..."

Read the rest of the story at her website.