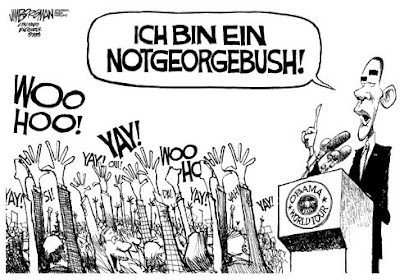 With Obama at the Brandenburg gate, some attention will certainly be directed back to Kennedy's appearance, and his famous/infamous quotation, often referred to in the following manner:

Some of the world's best jelly doughnuts are made in Berlin and known as Berliner Pfannkuchen. In Kennedy's famous speech at the Berlin Wall he said "Ich bin ein Berliner," to declare his solidarity with the people of Berlin. He thought he was saying the equivalent in German of "I am a Berliner." But in idiomatic German that should have been, "Ich bin Berliner." By adding the indefinite article, ein, the president was saying "I am a jelly doughnut."

That apparently is an erroneous oversimplification; some years ago I found the following comments in an online thread (source lost), which per my German language background, sound accurate:

"As I learned from reading his speech, JFK was talking about freedom for all people and that Berlin should be a symbol of freedom. In this case he would be a person of Berlin. This is why he said: Ich bin ein Berliner. Had he said, ich bin Berliner, he would have meant that he is a citizen of Berlin, which he wasn't. Therefore I think he was right. And by the way... a Berliner is a doughnut, filled with jelly, but is only called this in some parts of Germany. In Berlin, everybody says Pfannkuchen. My grandparents, who were there, understood what he was trying to say, as did the rest of Berlin, I am sure."

"Kennedy DID make one small mistake, but it had nothing to do with a jelly donut! "Ich bin Berliner" takes on the literal meaning of the phrase "I am a citizen of Berlin." It would have been incorrect for Kennedy to say this when referring to himself since we all know he didn't reside in West Berlin. The addition of 'ein' into "Ich bin ein Berliner" gives the figurative meaning of the phrase. It's along the lines as saying "I am LIKE a citizen of Berlin" or "I am one with the citizens of Berlin." So what mistake did JFK make? Well, he used the phrase twice during his speech. Once in reference to the citizens of Berlin and once in reference to himself. He should not have used the figurative phrase both times. He should have said "Ich bin Berliner" the first time and "Ich bin ein Berliner" as he finished the speech."