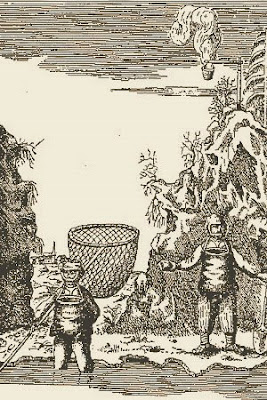 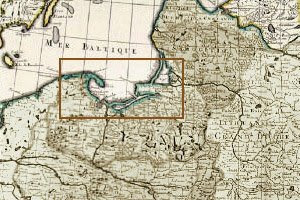 "During prehistoric times, wind and waves coming ashore from the Baltic Sea formed what is known as the Curonian Spit on Poland and Lithuania's famous Amber Coast [map above]. Running southwest to northeast, the spit varies in width from 430 yards to 2 miles and is sixty miles long. Along this shore, banks of pine trees and sand dunes separate the Baltic from the Curonian Lagoon. For thousands of years, amber that has been pulled up from the ocean floor by strong tides and fierce storms has been deposited along this shorline.

In the marshy regions along this coast, where the tides were unpredictable, amber was collected on horseback by "amber riders" who used poles and nets called "amber-catchers." There were also "amber divers" who carried a wooden spade to loosen amber from the sea floor.

The earliest evidence of an amber workshop in Gdansk dates back to the 9th and 10th century AD. Local dukes held an exclusive right to "fish" and mine amber, and the amber fishermen had to obtain an amber-fishing license from the city government. The illustration [above top] showing an amber-fisher is from 'Succini prussici physica et civilis historia' in 1697."

(Credit for text and images HERE)