Ask the people of Greenland about global warming 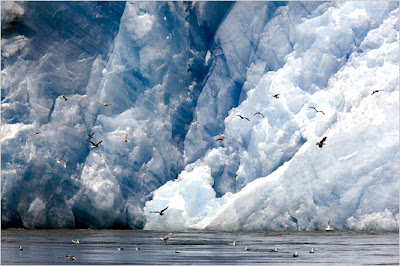 "I’d like to say that global warming was evident during my visit, but that is not really the case. Indeed, Salik tells me that he and most Greenlanders are pretty skeptical about it. The local fishing industry used to be based on arctic prawns, but the sea temperature has changed just enough that the prawns are much further north, so now they fish for cod.

But, as Salik points out, this cycle has happened several times in living memory. The same with the glaciers: yes they are retreating, but at least in his area, they have yet to reach the limits that the locals remember them. Objective measurements do show that climate change is happening. Nevertheless I was amused that the locals don’t seem to think it is such a big deal..."

(Text and image from Freakonomics)