Possible origin of the "hobble skirt" 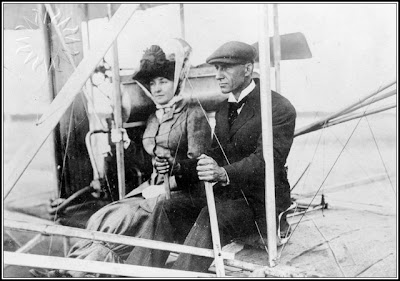 Hobble skirts and the similar "pencil skirts" of the 1940s (above) were reportedly first created by French designer Paul Poiret just after the turn of the century. Some suggest that he was inspired by photos of Mrs. Hart Berg who accompanied the Wright brothers during some of their early flights and tied a rope around her skirt below the knees to preserve her modesty (see the image embedded above). In mid-century the style achieved tremendous popularity, but in the modern pragmatic world, apart from some wedding and Goth dresses (a la Morticia in the Addams family), the style has been relegated primarily to the world of bondage fetishists.