A "necktie party" for neckties? 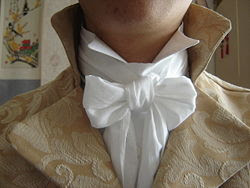 As a pragmatist who prefers functionality over fashion and affectation, I for one will not bemoan the "death of the necktie," as implied by the impending dissolution of the trade association for that clothing item:

"Association members now number just 25, down from 120 during the 1980s power-tie era. U.S. tie companies have been consolidating...According to a recent Gallup Poll, the number of men who wore ties every day to work last year dropped to a record low of 6%, down from 10% in 2002...Although sales are expected to get a bump around Father's Day, June 15, the future of neckties is very much in doubt...

The Wiki review of the subject traces the history of the tie to about 1600, when changeable neckcloths were deemed more practical than changing an entire doublet that became soiled (presumably while dining). The modern equivalent is, of course, the "Dress for Dinner" napkin.

The neckcloth evolved into the cravat, a word derived from the French term "cravate" used for Croatian mercenaries ("Croat" in Croatian is "Hrvat").