The fungi of the Chernobyl reactor 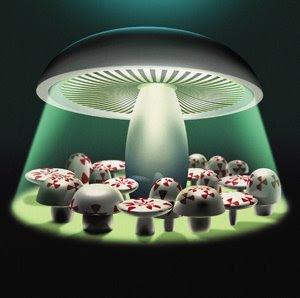 There are a number of interesting links on the web about the current status of the Chernobyl plant and the nearby town of Pripyat. Today I ran across an interesting article about the biological developments occurring inside the reactor itself:

"The exclusion zone is teeming with wildlife of all shapes and sizes, flourishing unhindered by human interference and seemingly unfazed by the ever-present radiation. Most remarkable, however, is not the life buzzing around the site, but what's blooming inside the perilous depths of the reactor.

Sitting at the centre of the exclusion zone, the damaged reactor unit is encased in a steel and cement sarcophagus. It's a deathly tomb that plays host to about 200 tonnes of melted radioactive fuel, and is swarming with radioactive dust.

But it's also the abode of some very hardy fungi which researchers believe aren't just tolerating the severe radiation, but actually harnessing its energy to thrive...

In 1999, a robot sent to map the inside of the reactor returned with samples of a particularly black fungi, indicating an abundance of the biological pigment melanin, which also colours your skin... melanised fungi, happily congregating in the cooling pools of functional nuclear reactors, and by studies of dark, 'radiation-seeking' fungi, purposefully growing towards radioactive particles in soil, particularly around Chernobyl...

They also saw a change in the pigment's electronic structure. This, Dadachova says, is evidence "that melanin transformed part of the ionising radiation energy into the energy of electrons, which represents the 'chemical' form of energy [that] fungi could potentially use in their metabolism."

Taken together, the researchers think their results do indeed hint that fungi can live off ionising radiation, harnessing its energy through melanin to somehow generate a new form of biologically usable growing power...

Their melanin gene, she said, might eventually be popped into food crops and used to help growth in difficult regions. And astronauts on long spaceflights might one day find a useful, self-replenishing diet in black, melanin-rich fungi.

And because the fungi don't actually 'eat' radioactive material, but simply use the energy it radiates, Dadachova said, they're in no danger of becoming radioactive themselves.

(text and image from Cosmos magazine)