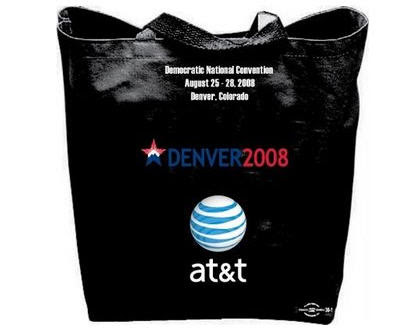 The bag above is the one that will be given to delegates at the Democratic National Convention in Denver next month. One side prominently displays the logo of AT&T the other has the logo of Coca-Cola [to be carried into the Pepsi Center!].

For initial commentary I'll defer to Glenn Greenwald in Salon:

What's most striking about the Convention bag... is how the parties no longer bother even trying to hide who it is who funds and sponsors them. But -- an earnest citizen might object -- just because AT&T is helping to pay for the Democrats' convention and having its logo plastered all over it the way a ranch owner brands his cattle doesn't mean that they will receive any special consideration when it comes time for Congress to debate and pass our nation's laws...

As a result of Mr. Farber's efforts [Farber is chief fundraiser for the convention], dozens of organizations have signed up as corporate sponsors of the Denver convention, including six that are lobbying clients of his firm: UnitedHealth Group, AT&T, Comcast, the National Association of Home Builders, Western Union and Google. In return for these donations, which can go up to $1 million or more, sponsors are promised prominent display space for corporate marketing and access to elected officials and Democratic leaders at a large number of parties and receptions.

"Farber has a dual role," said Steve Weissman, a policy analyst at the Campaign Finance Institute who has studied convention finances. "He is a businessman and a community activist, and yet he is connected to a law firm that is one of the biggest in Washington. When any of Steve Farber's clients have a problem, federal elected officials will feel obligated to listen to him if he approaches them later on federal policy interests."

I won't try to connect this to the telecom immunity fiasco, and I'm not naive enough to believe this is limited to the Democrats, nor that it is anything new; similar - though perhaps more subtle - processes have probably been at work for the last century (or more). Nor is it limited to politics; doctors receive bags at their conventions and fill them with pens and flashlights with pharmaceutical logos, and similar processes probably occur at conventions for attorneys, educators and every other professional.

There's something fundamentally wrong here, and public recognition of this wrongness is one of the factors that helped drive the Ron Paul revolution to prominence, and will likely propel Obama to the presidency. Too much influence is bought in national politics. Congress has the lowest approval rating in history for a reason. Too much power is concentrated in the hands of people who are not working for the public interest. Things need to change, because our whole system is going down the toilet.