Photographing "hoodies" said to be illegal 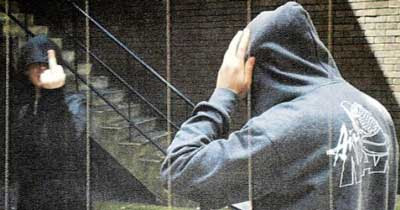 "A householder who took photographs of hooded teenagers as evidence of their anti-social behaviour says he was told he was breaking the law after they called the police.

David Green, 64, and his neighbours had been plagued by the youths from a nearby comprehensive school for months, and was advised by their headmaster to identify them so action could be taken.

But when Mr Green left his London flat to take photographs of the gang, who were aged around 17, he said one threatened to kill him while another called the police on his mobile.

And he claimed that a Police Community Support Officer sent to the scene promptly issued a warning that taking pictures of youths without permission was illegal, and could lead to a charge of assault."

(Text and image credit from Nothing to do with Arbroath.)