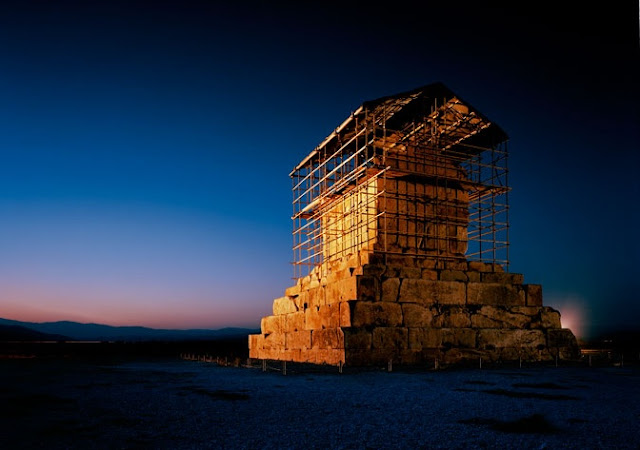 There is an interesting article in the online National Geographic covering the history of Persia and modern Iran.

The image embedded above is of the tomb of Cyrus the Great at Pasargadae, with scaffolding reflecting preservation and restoration efforts. Cyrus formed Persia into perhaps the world's first "superpower," and established what many consider the "world's first religiously and culturally tolerant empire" comprised of 23 different peoples.

The article briefly reviews how because of Iran's strategic location, the great Achaemenid culture was eventually overrun by Mongols and Turks and Islamic Arabs, and how among many current Iranians there is a dislike of Arabs as a result of that history.

The modern conflict with the West can be traced back to 1953 when, in order to secure Iran's oil, Great Britain and the U.S. used the CIA to engineer a coup, overthrowing the democratically-elected Mohammad Mossadegh, and placing on the throne the notorious Shah of Iran backed by his SAVAK secret police. That of course eventually led to the counterrevolution by the mullahs and the rise of Islamic fundamentalism. One cannot help but wonder how today's world would be different had the democracy of 1953 been allowed to persist.