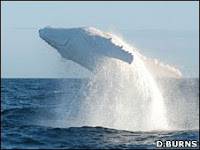 From the BBC this morning:

A new white humpback has been sighted off Byron Bay on the east coast of Australia.

The newcomer, which was filmed by a television news helicopter, has excited marine scientists who think it may be related to Migaloo - to date, the only known all-white humpback whale.

Migaloo is somewhat of a celebrity down under. Why? "Because as far as we know, he is globally unique," said Professor Peter Harrison from the Whale Research Centre, Southern Cross University.

It now seems that Migaloo, (whose Aboriginal name means "white fellow") might have competition.

Although predominantly white, the new whale does have some black markings near its head and tail. So who is the newcomer?

A white calf was spotted with a normal humpback mother in Byron Bay two years ago. Experts say the new whale could be the offspring of Migaloo but further tests need to be carried out.

A record number of humpbacks have been spotted off the Australian coast this year on their annual migration north to their breeding grounds.

That's great news - especially the record number of humpbacks. BUT... is the title of this piece (taken from the BBC article) self-contradictory???