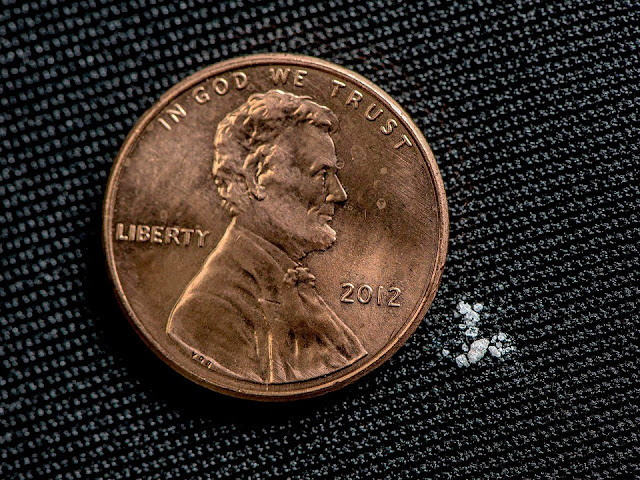 Just as a point of reference: fentanyl is the most commonly used opioid (morphine-like drug) used in surgeries. We generally dose 50-100 micrograms/0.05-0.1 milligrams initially. This amount is enough to get most people to stop breathing for a few seconds to a few minutes, until the body’s respiratory stimulation defenses kick in. The body then immediately begins downregulating the number of opioid receptors.

This happens so quickly that a second, identical dose given a few minutes later will likely not cause the person to stop breathing at all. It also explains the constant need to increase the dose to get a similar high when abusing an opioid, and why it’s so hard for anyone taking opioids to feel “normal” without them - the body literally adjusts to create a new normal. Without more opioids, feeling “normal” just isn’t possible.

The fentanyl used in hospitals comes in a liquid form, with a concentration of 50 micrograms/ml. There’s very few problems with overdosing, since most of our pain/sedation drugs are given one ml at a time. (Example: morphine is given at 1mg/ml.) So even though the potency of fentanyl is greater than morphine, the dose that is given is less.

As mentioned below, much of the problem with street fentanyl is that it comes in a powdered form that has variable potency, especially after it’s cut. It doesn’t take much fentanyl to “improve” low-grade heroin. If your first hit of fentanyl-laced heroin is mostly heroin, no problem (lower potency heroin = lower dose opioid). If your second hit is mostly fentanyl, you’re dead (higher potency fentanyl = higher dose opioid). That’s how someone can die even when multiple hits have been taken out of the same bag.

TLDR: Medical-grade fentanyl has a very consistent potency and is relatively easy to dose, street fentanyl/heroin is a crap shoot.

Source: am an anesthesiologist.