"Medical tourism" goes to the next level 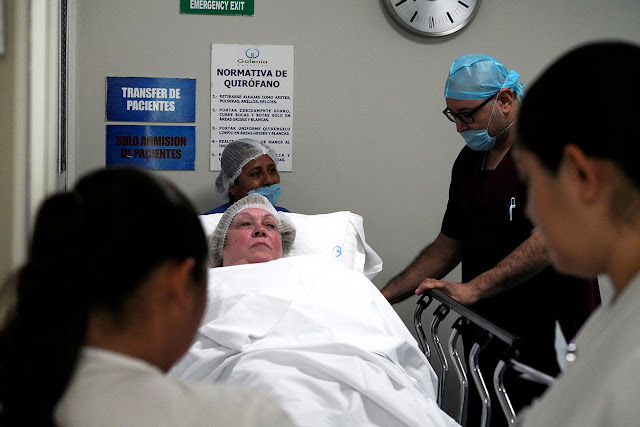 Most Americans are familiar with the concept of "medical tourism" - traveling to another country to get necessary care at more affordable prices.  An article in Kaiser Health News shows how far this concept can be taken.  The patient from Mississippi traveled to Mexico, as did a surgeon from Wisconsin.  Her total knee replacement prosthesis was made in the United States.  And the entire process was paid for by her American medical insurance company.


The hospital costs of the American medical system are so high that it made financial sense for both a highly trained orthopedist from Milwaukee and a patient from Mississippi to leave the country and meet at an upscale private Mexican hospital for the surgery.

Ferguson gets her health coverage through her husband’s employer, Ashley Furniture Industries. The cost to Ashley was less than half of what a knee replacement in the United States would have been. That’s why its employees and dependents who use this option have no out-of-pocket copayments or deductibles for the procedure; in fact, they receive a $5,000 payment from the company, and all their travel costs are covered...

Parisi, a graduate of the Mayo Clinic, is one of about 40 orthopedic surgeons in the United States who have signed up with NASH to travel to Cancun on their days off to treat American patients. NASH is betting that having an American surgeon will alleviate concerns some people have about going outside the country, and persuade self-insured American employers to offer this option to their workers to save money and still provide high-quality care...

The high prices charged at American hospitals make it relatively easy to offer surgical bargains in Mexico: In the United States, knee replacement surgery costs an average of about $30,000 — sometimes double or triple that — but at Galenia, it is only $12,000, said Dr. Gabriela Flores Teón, medical director of the facility.

The standard charge for a night in the hospital is $300 at Galenia, Flores said, compared with $2,000 on average at hospitals in the United States.

The other big savings is the cost of the medical device — made by a subsidiary of the New Jersey-based Johnson & Johnson — used in Ferguson’s knee replacement surgery. The very same implant she would have received at home costs $3,500 at Galenia, compared with nearly $8,000 in the United States, Flores said...

“It’s been a great experience,” she said two days after the surgery. “Even if I had to pay, I would come back here because it’s just a different level of care — they treat you like family."