Why is Peru on fire? 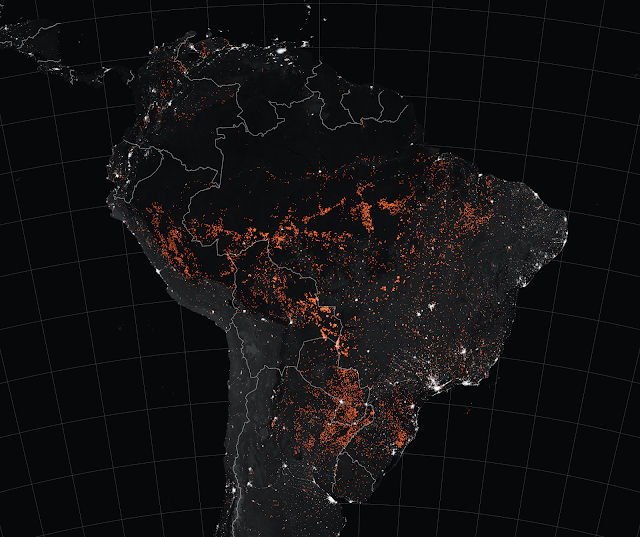 Found the photo above today - a satellite image from August 22 - showing the locations of fires in South America (if the embed doesn't enlarge, the original will X2).

It's clear there are fires raging through the Amazon.  My impression from internet news reports was that they were largely attributable to the policies of Brazilian president Jair Bolsonaro, and refleced clearing of the forest for industrial-scale farming.

But... the image clearly shows extensive fires in Peru.  And in Bolivia.  And Paraguay.

It may be for similar reasons, but I can't see how Bolsonaro can be implicated by the fires in the other countries.  And if not there, perhaps not in Brazil?  Has it become standard practice for the people of South America to burn off their forests??  Are some of these fires oil drills degassing rather than forests?

I'll send the query to my cousin who is currently in Peru.  In the meantime I'd appreciate opinions from knowledgeable readers.

Addendum: A tip of the blogging hat to reader Colin for providing the link to the relevant NASA Visible Earth page:


Fire activity in the Amazon varies considerably from year-to-year and month-to-month, driven by changes in economic conditions and climate. August 2019 stands out because it has brought a noticeable increase in large, intense, and persistent fires burning along major roads in the central Brazilian Amazon, explained Douglas Morton, chief of the Biospheric Sciences Laboratory at NASA’s Goddard Space Flight Center. While drought has played a large role in exacerbating fires in the past, the timing and location of fire detections early in the 2019 dry season are more consistent with land clearing than with regional drought...

The map above shows active fire detections in Brazil as observed by Terra and Aqua MODIS between August 15-22, 2019. The locations of the fires, shown in orange, have been overlain on nighttime imagery acquired by VIIRS. In these data, cities and towns appear white; forested areas appear black; and tropical savannas and woodland (known in Brazil as Cerrado) appear gray.

I was wondering about the black/gray demarcation and also why city lights did not overwhelm the fires (this is a composite image of two methodologies).  But I'm still puzzled by the extra-Brazilian distribution.