If you only listen to one video about Bernie Sanders, this should be the one

Television coverage of Bernie Sanders typically focuses on his presentations to large groups of people in auditoriums; that format almost of necessity requires shouting a series of brief soundbites and standard phrases.

In this interview, Bernie sits at a table and for an hour calmly and carefully discusses major topics in depth.  He begins by noting that the Democratic "debates" shouldn't even be called that - that they are essentially reality TV shows.  At 04:30 the host asks him to explain "misconceptions about you" (re socialism in particular).  At 05:30 the topic shifts to health care, then at 11:00 to lobbyists and their power, then about 17:00 on to minimum wage, the corruption of a political system that ignores working people, student debt and college costs, then at about 32:00 gun control, at 45:00 marijuana and drugs, and finally at 55:00 climate change.

It is so refreshing to listen to this format rather than to shouting from a podium.  I know most readers of TYWKIWDBI will skip this post entirely, but I encourage everyone to at least try the first 5-10 minutes.  Turn it on while you fix a lunch or do laundry.  This video gives a better sense of the man and his mindset than anything else I have encountered.

Just try ten minutes.  Even if you don't like him. 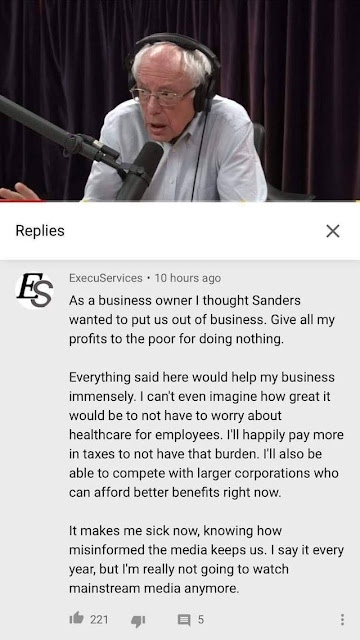