"Wing pollination" of azaleas by swallowtails 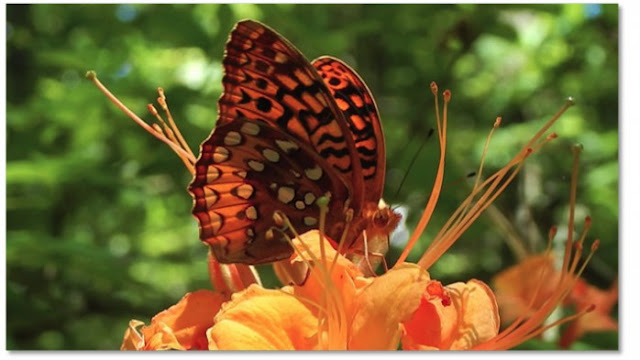 The most interesting thing I've read about butterflies this year was a study by Mary Jane Epps, an assistant professor of biology at Mary Baldwin College who examined the reproduction of flame azaleas, publishing her results last August in The American Naturalist.  Here's the abstract:


Although many angiosperms are serviced by flying pollinators, reports of wings as pollen vectors are rare. Flame azalea (Rhododendron calendulaceum) is visited by diverse insects, yet previous observations suggested that only butterfly wings may transfer pollen to stigmas. We used an experimental approach to determine whether butterfly wings are the primary vehicle of pollination in flame azalea. Over two seasons of observations, only butterflies (Papilio glaucus and Speyeria cybele) contacted both anthers and stigmas, yet because of differences in wing-flapping behavior, P. glaucus transferred pollen most efficiently. In contrast, bee species specialized either on pollen or nectar but did not contact both anthers and stigmas. A field experiment revealed that flowers excluding butterflies experienced almost complete fruit failure, whereas fruit set in open flowers did not differ from those that were hand pollinated. Additionally, butterflies had 56-fold more azalea pollen on their wings than bodies, while azalea stigmas bore both pollen and wing scales. These results suggest that plants with many visitors contacting reproductive organs may still specialize on a single guild of visitors for pollination and that wing-borne pollen transfer is a key mode of flame azalea pollination.

Every reader of this blog will be familiar with mechanisms of pollination by bees and similar small insects, which transfer pollen on their bodies and feet.  This becomes a problem when the blossoms are large:


“In order for a plant to reproduce, a pollinator – usually an insect – has to spread the pollen from the anther to the stigma,” Epps says. “In the case of the flame azalea, the distance between these two structures meant that it was unlikely for a bee or other small pollinator to come into contact with both anther and stigma during a visit.”

The researchers discovered something else interesting – the pollen was most likely being transferred by the butterflies’ wings, instead of their bodies. “We observed two species of butterfly that frequented these flowers: the eastern tiger swallowtail and the great spangled fritillary. However, the majority of the butterflies were the swallowtails, who differ from the fritillaries because they tend to keep moving their wings even when gathering nectar from a flower,” Epps says. “The constant fanning motion gives the wings a number of contacts with both anther and stigma, making the swallowtails more efficient at pollination.”

I've noticed this behavior in our back yard, when Tiger Swallowtails and Giant Swallowtails constantly flutter their wings while visiting large blossoms (not azaleas at our latitude).  In the past I considered this wing motion a nuisance because it frustrated my attempts to get good photographic images, but I assumed it was done to achieve aerodynamic stability (though it doesn't occur with almost-as-big fritillaries, who hold their wings quite still).

Here's one additional relevant photo, of Spicebush swallowtails on azalea, by Jim McCormac: 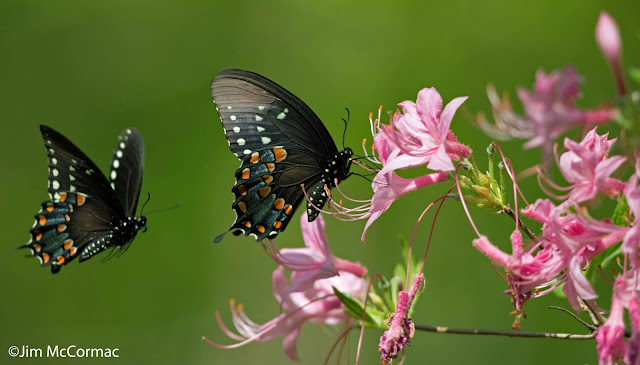 Reposted from 2016 to append this photo of a Tiger Swallowtail (Papilio glaucus) nectaring on Monarda ("bee balm") in our front yard yesterday. 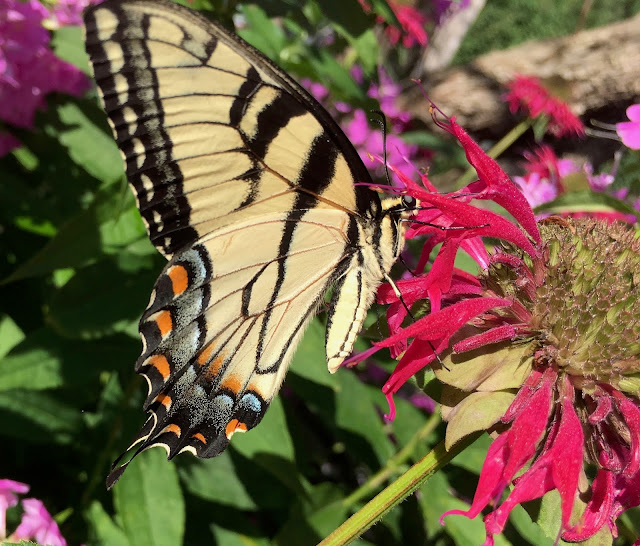 A surprisingly sharp image.  This fellow was so eager for the nectar that he let me get an inch away with my cellphone.  The Monarda (and the phlox behind it) was very busy with bees and butterflies (also a Monarch, two Painted Ladies, and a Silver-spotted Skipper).