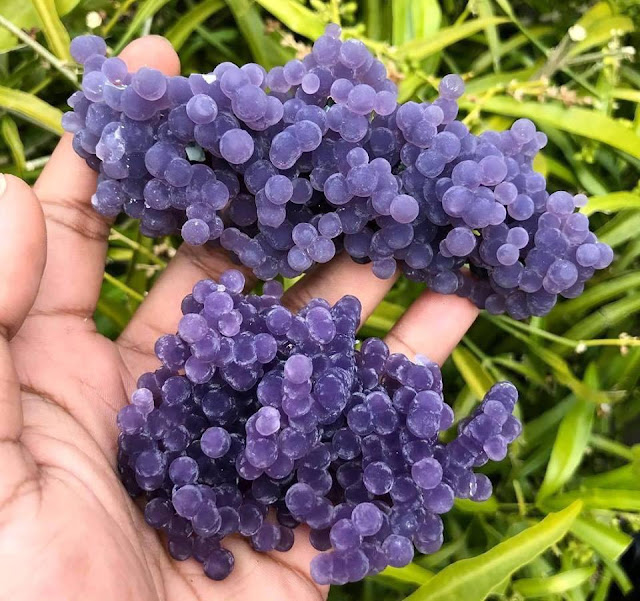 Chalcedony ( /kælˈsɛdəni/) is a cryptocrystalline form of silica, composed of very fine intergrowths of quartz and moganite. These are both silica minerals, but they differ in that quartz has a trigonal crystal structure, while moganite is monoclinic. Chalcedony's standard chemical structure (based on the chemical structure of quartz) is SiO2 (silicon dioxide).

Chalcedony has a waxy luster, and may be semitransparent or translucent. It can assume a wide range of colors, but those most commonly seen are white to gray, grayish-blue or a shade of brown ranging from pale to nearly black. The color of chalcedony sold commercially is often enhanced by dyeing or heating.

The name chalcedony comes from the Latin chalcedonius (alternatively spelled calchedonius). The name appears in Pliny the Elder's Naturalis Historia as a term for a translucid kind of Jaspis. The name is probably derived from the town Chalcedon in Asia Minor. The Greek word khalkedon (χαλκηδών) also appears in the Book of Revelation (Apc 21,19). It is a hapax legomenon found nowhere else, so it is hard to tell whether the precious gem mentioned in the Bible is the same mineral known by this name today.

Image via.  I rather suspect this specimen has been dyed.  It was described as "natural" at the link,  but the word may have applied to the structural formation rather than the color.

Addendum:  A tip of the blogging cap (and my rockhounding sunhat) to an anonymous reader who found a discussion of this "grape" chalcedony in a mindat discussion thread.  Apparently the color can be natural, and it may be appropriate to consider this a form of amethyst!