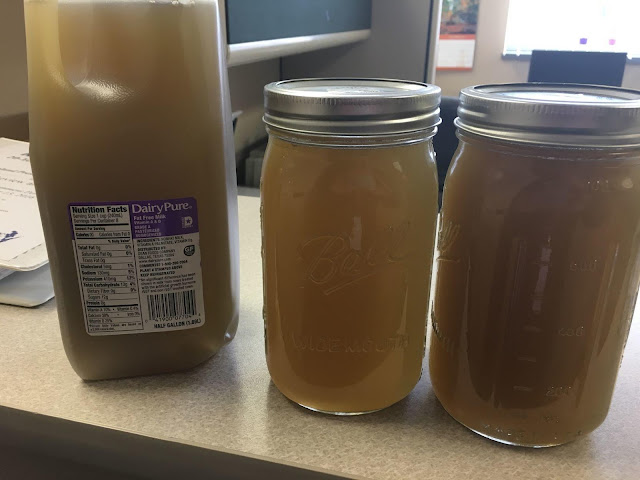 "Kewaunee County conservation officer Davina Bonness collected this tap water from a homeowner in 2016. It contained animal waste that matched manure spread on a nearby farm field."

As reported by the Wisconsin State Journal:

The majority of private wells in southwestern Wisconsin are substantially polluted with fecal matter as concerns intensify over pollution of rural drinking water, according to a new study.

Results from the independent study released Aug. 1 indicated that 32 of 35 wells — or 91% — contained fecal matter from humans or livestock, the Milwaukee Journal Sentinel reported.

“As a researcher of groundwater for 25 years now, I continue to be amazed by the level of fecal contamination in Wisconsin groundwater,” said Mark Borchardt, a research microbiologist for the U.S. Agricultural Research Service...

During testing in April, it was discovered that some of the wells contained illness-causing pathogens such as salmonella, rotavirus and cryptosporidium...


On July 31, Democratic Gov. Tony Evers proposed new rules aimed at farmers and their use of manure and fertilizer. The regulations would focus on the regions vulnerable to nitrates, another source of groundwater pollution.

But those measures will require authorization by the Republican-controlled Legislature.