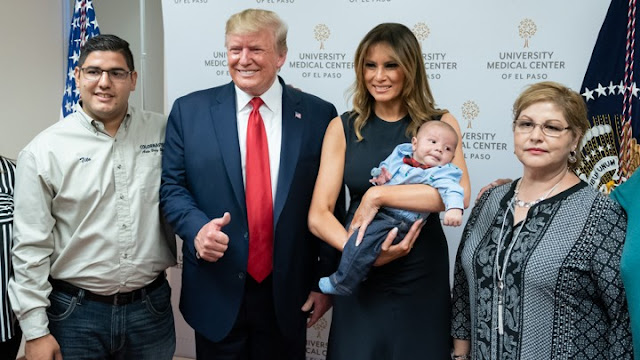 As much as possible I try to cluster all of my Trump-related postings into occasional "Trump clumps," but this publicity photo is so egregiously offensive that I felt compelled to highlight it.  The commentary is by Graeme Wood at The Atlantic:


The latest publicity photograph of the president in El Paso, Texas, knocked me into silence for a good half hour this morning while I tried to figure out the many layers of obscenity on display. The photo features a baby whose parents were killed in El Paso a few days ago. The baby survived because his parents shielded him with their bodies. In the photo, he is cradled by Melania Trump. The president is next to her; both are smiling broadly, and the president is offering a thumbs-up. The child is expressionless and wearing a cute plaid bow tie...

First there are the smiles, so chipper in the aftermath of mass murder... Then there is the thumbs-up, ... in this case to signal approval of what, exactly? The narrow survival of the infant? The heroism of the hospital staff and first responders who cared for the wounded?...

The optical demands of the job are impossible to appreciate, and we should forgive him for the occasional failure to twist his face into an appropriate expression. But sometimes—and this is one of those times—the optical demands of the office are the only demands. In the immediate bereavement of an infant’s parents, nothing is needed but respectful silence.