What the well-dressed woman wore 200 years ago 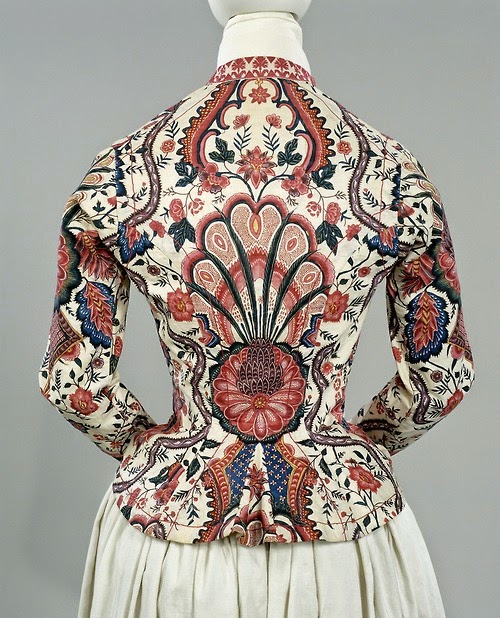 For those who, like me, are unclear about what chintz is, this from the Wikipedia entry:


Chintz (from the plural of chint) was originally glazed calico textiles, initially specifically those imported from India, printed with designs featuring flowers and other patterns in different colours, typically on a light plain background. Since the 19th century the term has also been used for the style of floral decoration developed in those calico textiles, but then used more widely, for example on pottery and wallpaper. Chintz designs are mostly European patterns loosely derived from the style of Indian designs themselves reflecting, via Mughal art, decorative traditions in Islamic art such as the arabesque...

These early fabrics were extremely expensive and rare. By 1680 more than a million pieces of chintz were being imported into England per year, and a similar quantity was going to France and the Dutch Republic....

In contemporary language the word "chintz" and "chintzy" can be used to refer to clothing or furnishings which are vulgar or florid in appearance....

From the Rijksmuseum, via A London Salmagundi.

("chint" apparently is a Hindi word for the original product)