A cloud of midges and a bucket on the head

The fecundity of the natural world can be awesome, as shown in this video.

Back in 2012 I posted a video (now dead) of a "bugnado" - a swarm of midges filmed in Iowa.  The only comment it elicited from a reader was from Alecia:


We experienced this quite a bit at Lake Myvatn in Iceland. During the summer, the swarms of midges are so thick that it looks as if the lake is on fire, with smoke rising out of the water.

Although beautiful, my husband still refers to it as "hell on Earth." Though the midges don't bite, they will swarm humans, getting in your mouth, eyes, ears.

This weekend I found the video above, which was taken on the aforementioned Lake Myvatn.   Imagine being in that boat and needing to cross the lake.  And in case you are wondering about the name of the lake:


The name of the lake (Icelandic mý ("midge") and vatn ("lake"); the lake of midges) comes from the huge numbers of midges to be found there in the summer.

The biology of the creatures is most interesting:


Diamesa mendotae, a cold-hardy but delicate insect also known as a midge, [have an] unusual ability to thrive in the winter, when they serve as trout food. When most other insects are idling, with eggs and larvae hidden away from the cold, midges, armed with a sort of internal antifreeze, produce several generations of offspring. Stream anglers, skiers and others who might poke into the deeper recesses of southeastern Minnesota during winter see them flying in clouds above the water or speckling the streamside snow...

[They] can remain active down to about 6 degrees below zero... The midges are also high in calories and nutrients -- "like pecan pie" for trout, Ferrington said. But their cold-hardiness is balanced by an intolerance for warmth. An increase of as little as 1.8 degrees in the average water temperature in a stream could wipe out an entire winter reproductive cycle for them.

How does one cope with the mass emergences?  Basically one has to follow the advice Lyndon Johnson offered about coping with the downsides of the presidency:


"Sometimes it's like being a jackass in a hailstorm. You just have to hunker down and take it."

The lady in the boat quite sensibly copes by placing a bucket over her head: 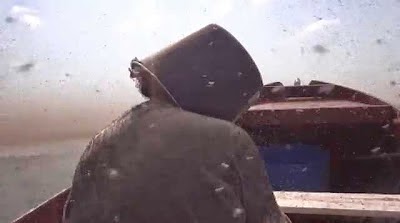 That gesture pretty well exemplifies how I feel on some days as I read about environmental degradation, the economy, world geopolitics, American healthcare, and American politics.  You want to fight, or at least to protest, but... (reaches for bucket)...

Via Nothing to do with Arbroath.