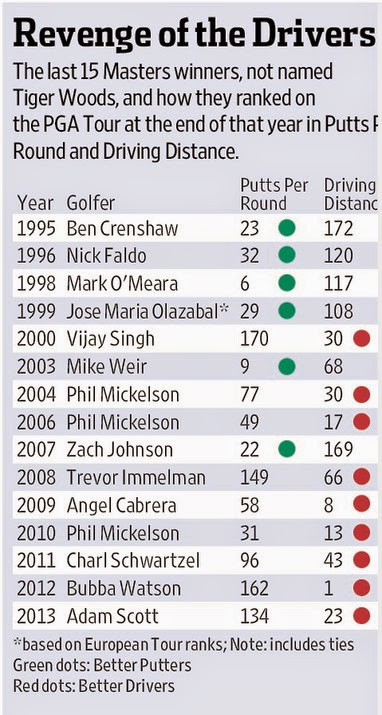 Once again (for the 40th year in a row), my invitation to participate in the Masters golf tournament must have been lost in the mail.   So I'll just blog this table from a Wall Street Journal article.

In 2002, after long-driving players like Tiger Woods began carding record-low scores, officials at Augusta National decided to lengthen the course in an effort to make it more difficult.  What has happened, however, is that the added length seems to have given a comparative advantage to the long drivers.

The table at right shows Masters' winners for about 20 years (excluding Tiger), and how they ranked among all pros in terms of putting efficienncy and driving distance.

Before 2002, short game skills were paramount, but in recent years winners have shown higher ranks in driving than in putting.

This is a complex issue involving not just course design but equipment design.  There are studies I don't think I have blogged that indicate that a longer drive - even when it winds up in the first or second cut of the rough - results in better scores than shorter drives that remain in the fairway.